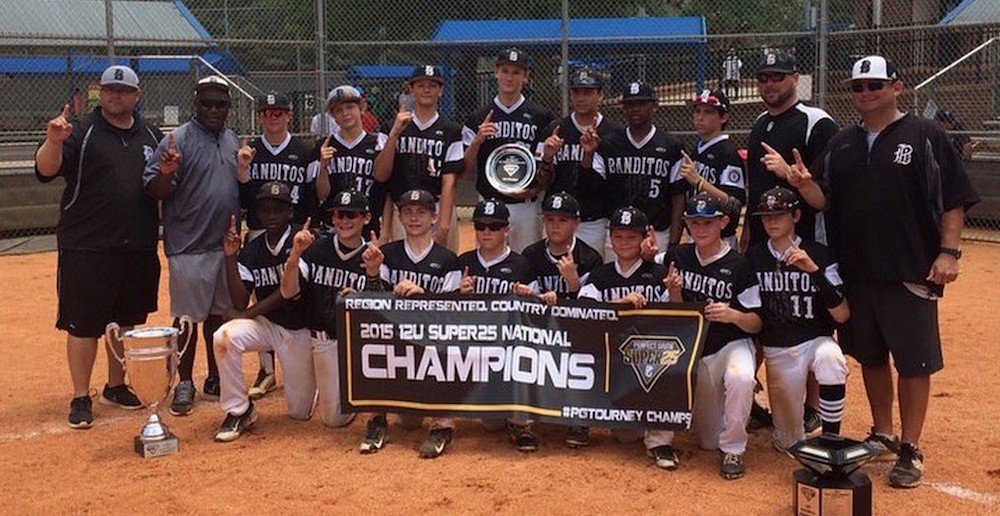 Published: Tuesday, July 21, 2015
They came, they saw, they conquered. The Banditos concluded an undefeated tournament with a 13-11 shootout victory over the hometown East Cobb Astros in the championship game. The Banditos erased a five-run deficit with a third-inning offensive outburst en route to becoming the 2015 PG Super25 12u National Champions!
The Astros came out firing as DJ Radtke connected for a monstrous grand slam to straightaway center field in the top of the first. With one swing of the bat, the Banditos found themselves in a four-run hole. Unfortunately for the Banditos, Ivan Reap extended the Astros’ lead to five with an RBI single in the following inning.

The Banditos never panicked, in fact, they did quite the opposite. They responded in the third inning with a flurry of extra-base hits, including home runs by Casen Neumann and Jacob Danna. Following their offensive resurgence, the Banditos held a 7-5 lead.

In the final two innings, the Astros matched the Banditos hit for hit, but they could not wrestle the lead from the Banditos. Cameron Moore gave the Banditos some separation with a three-run bomb to right field, but the Astros stayed hot on their tail. Down four runs in the top of the sixth inning, the Astros had one last shot to tie the score. Errors and aggressive base-running put runners in scoring position, but the Banditos ultimately fended off the Astros’ two-run rally to secure the 13-11 championship game victory.

The Banditos ran the gauntlet of 12u teams and emerged unscathed with a perfect 7-0 record. Westin Walls received the MVPitcher award for his terrific semifinal performance, while James Tibbs of the Astros’ was rightfully named the MVP of the 12u tournament. Congratulations to the Banditos, the 2015 PG Super25 12u National Champs!