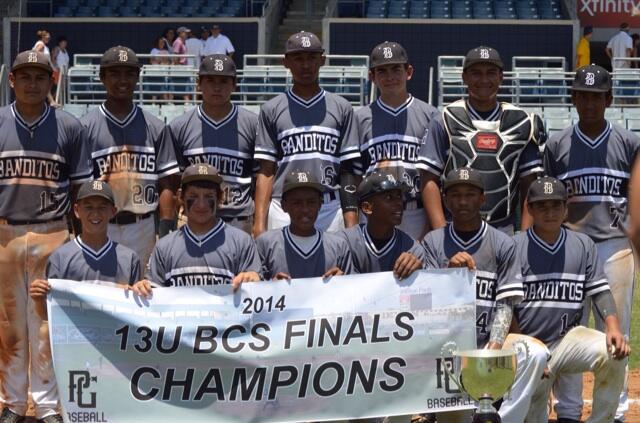 FORT MYERS, Fla. – Never deterred, never derailed and, ultimately, never defeated, the always determined Banditos Black once again found themselves standing one rung on the ladder above the rest.

The Richmond, Texas-based Banditos Black rolled through pool-play with enough power and precision to earn the playoffs’ No. 1 seed, never took their hands off the throttle and rolled to the 13u PG BCS Finals Perfect Game national championship.

Their 10th and final win in 10 games at the six-day event was a 9-2 victory over the No. 2 seeded Florida Stealth in the tournament’s championship game played Wednesday at City of Palms Park. The title was the second straight at the 13u PG BCS Finals for the Banditos organization, although this was a completely different team from the one that took home the title last summer.

“Man, I tell you what, I really believe in these kids,” Banditos Black head coach Sanson Faltine said Wednesday after being doused with a nearly full cooler of ice water in an act of celebration by his talented young players. “They are troupers, they are baseball warriors that work hard, and they trust me and I trust them.

“The parents believe in the program, the Banditos organization is just second-to-none and these guys, they put that uniform on and they believe they can do anything; they got it done this week.”

The outcome of the championship game was never in doubt as the Banditos Black (10-0-0) scored in each of the first four innings and led, 7-0, heading into the fifth. The Florida Stealth (9-1-0) managed to plate single runs in each of the fifth and sixth innings but two more from the Banditos in the bottom of the sixth sealed the deal.

In 10 games over six days, the Banditos Black put on an offensive display that probably had their opponents seeing Banditos players circling the bases in their dreams. The Black scored 100 runs in 10 games while hitting .421 as a team (107-for-254) with 27 doubles and five triples, and team OPS of 1.062.

The Banditos’ best effort from the mound, however, belonged to 2018 left-hander Jacob DeLaCerda from Houston. The 138-pound DeLaCerda was named the tournament’s Most Valuable Pitcher after finishing 2-0 with a save in three appearances that covered 12 innings, and allowed no runs (0.00 ERA) on one hit while striking out 17 and walking nine.

“We’ve been preparing for this tournament the whole year,” Faltine said. “We’ve been playing (14u events) in Houston the whole year and we’ve won some games and lost some games, but it was all in preparation for this. The parents trust the organization to do what is best for these kids to get them ready for high school and beyond.”

While the Florida Stealth came up a little short in the championship game, they too enjoyed a terrific tournament and matched the Banditos Black’s offensive output. They hit .436 as a team (106-for-243) with 23 doubles and five triples with a 1.117 team OPS, and averaged 9.8 runs per game.

No individual player had a batter tournament than Stealth 2018 third baseman/right-hander Ryan Rivera from Jensen Beach, Fla. He was 15-for-23 (.652) with two doubles, two triples, 10 RBI, 13 runs scored, seven walks and a numbing 1.655 OPS at the plate, while managing to steal five bases once he got on base.

Rivera also made two appearances on the mound and finished 2-0 after allowing one earned run in 6 1/3 innings (1.10 ERA) on 10 hits. He was named the event’s Most Valuable Player.

Other Florida Stealth who enjoyed fine tournaments at the plate included Devin Roche, who finished 10-for-16 (.625) with four doubles, nine RBI and four runs, and Christopher Ferara, who was 9-for-18 (.500) with three doubles, seven RBI and nine runs.

“This has been great for the kids,” Sanguillen Jr. said. “The completion has been good; we had a little bad weather that first day but outside of that it was great. It really makes the guys understand that we have to play as a unit. It’s a long tournament and one guy is not going to get it done, and our guys are young and it helps them start to develop a team sense themselves.

“Everyone had to contribute. We went 9 and 1 and it took every player on the roster.”

The Banditos Black set the tone for this tournament when they outscored their first three pool opponents by a combined 41-0 before meeting some resistance in the next three games. They were still able to emerge unbeaten and top-seeded heading into the playoffs, and registered a 15-1 win over the D1 RENEGADES in the first round and a 4-0 blanking of the East Cobb Nationals in the quarterfinals.

“We are a good defensive team and I actually think in the second round (of pool-play) and in the championship bracket we didn’t play our best defense; we are normally better than that,” Faltine said. “But it is what it is – the humidity, the pressure of the game, everybody pitching their best against us – we made some errors but they pulled through and got it done.”

Godfrey, a 2018 outfielder from Spring, Texas, came through with a one-out, run-scoring double to deep left field in the bottom of the eighth inning to lead the Banditos Black to a dramatic 5-4 win over the fifth-seeded East Cobb Astros (7-2-0) in a semifinal game played Wednesday morning at the main stadium at City of Palms Park.

The back-and-forth affair saw the Astros hold a 3-2 lead after four, the Black grab a 4-3 lead after five and the Astros sending it into extra innings with a single run in the seventh. East Cobb was shut down in the top of the eighth, setting up Godfrey’s heroics.

Smith, a 2019 right-hander from Cypress, Texas, pitched an eight-inning complete game, and allowed three earned runs while scattering seven hits, striking out three and walking one.

Chayce Bryant and Kyle Gray, 2018s from Snellville, Ga., and Dallas, Ga., respectively, each were 2-for-3 with a double and an RBI for the East Cobb Astros.

The Astros lost their third game of the tournament in the first set of pool-play but came back strong, winning their first two pool-play games of the second set on Sunday by a combined 27-1. They wrapped up the pool championship with a 4-3 win over the Florida River Dawgs, and then beat No. 12-seed Team Mizuno Houston and No. 13 MCBC Hit Dogs in the first two rounds of the playoffs on Tuesday.

The Florida Stealth were models of consistency throughout their run into the semifinals, outscoring their first three pool foes, 29-9, and their next three, 33-4. That trend continued when they topped the No. 15 Colorado Yard Dawgs, 9-0, in the first round of the playoffs and dumped the No. 7 Banditos of Austin, 13-5 in the quarterfinals.

The Stealth scored five runs in the first inning, two in the third and four in the fourth to secure an 11-3 lead that held up for a 12-5 win over the third-seeded Weston Black Hawks (8-1-0) in a semifinal played at the auxiliary field at City of Palms Park Wednesday morning.

Only three of the Stealth’s 12 runs were earned as they took advantage of six Black Hawk errors. They combined their eight hits with seven walks and one hit batsman to give them all the base runners they would need.

Ferara was 2-for-3 with four RBI; Dane Dorsainvil went 2-for-4 with a double, two RBI and three runs scored and Roche doubled and singled and drove in two runs to lead the Stealth at the plate. 2018 left-hander Jordan Alvarez and 2020 lefty Nelson Berkwich combined on a seven inning four-hitter, allowing three earned runs with seven strikeouts and eight walks.

The Weston Black Hawks were the kings of the comeback throughout pool-play and outscored their six pool opponents by a combined 55-36. Their two playoff games on Tuesday were also tight affairs, with an 8-6 win over No. 14 Alex Cintron Baseball in the first round and a 6-5 win over the No. 6 Dallas Tigers-Hernandez in the quarterfinals; they came back from a 5-0 fourth inning deficit in the win over the Tigers.

The four semifinalists came into the day with a combined record of 31-1 with the East Cobb Astros’ game-three loss to fellow playoff qualifier Alex Cintron Baseball the only blemish. The No. 4-seeded Georgia Jackets National’s 7-0 loss to No. 13 MCBC Hit Dogs in the first round was the only outcome that kept the final four from including the top four-seeded teams.

At the end of the day, there stood the Banditos Black, never deterred, derailed or defeated, but as determined as ever.

“Most of these kids, this is the only thing they know,” Faltine said. “They work hard and they know the expectations are high and we’re just trying to follow in the footsteps of the other Banditos’ teams that have come before us. What Coach Ray (DeLeon) preaches all the time, ‘Go hard or go home’, that’s the name of the game. We keep the pressure on and when we step on the field the other team better know that we’ve come to play and we’re going to leave it all out on the field.”

With the 13u’s leaving town, there will now be plenty of room for a large group of older kids as the 9th annual 16u PG BCS Finals national championship takes over Lee County. Eighty-eight teams will compete for the title at the tournament, which kicks-off Thursday with the Home Run Challenge and the Fast Man Challenge competitions at City of Palms Park. 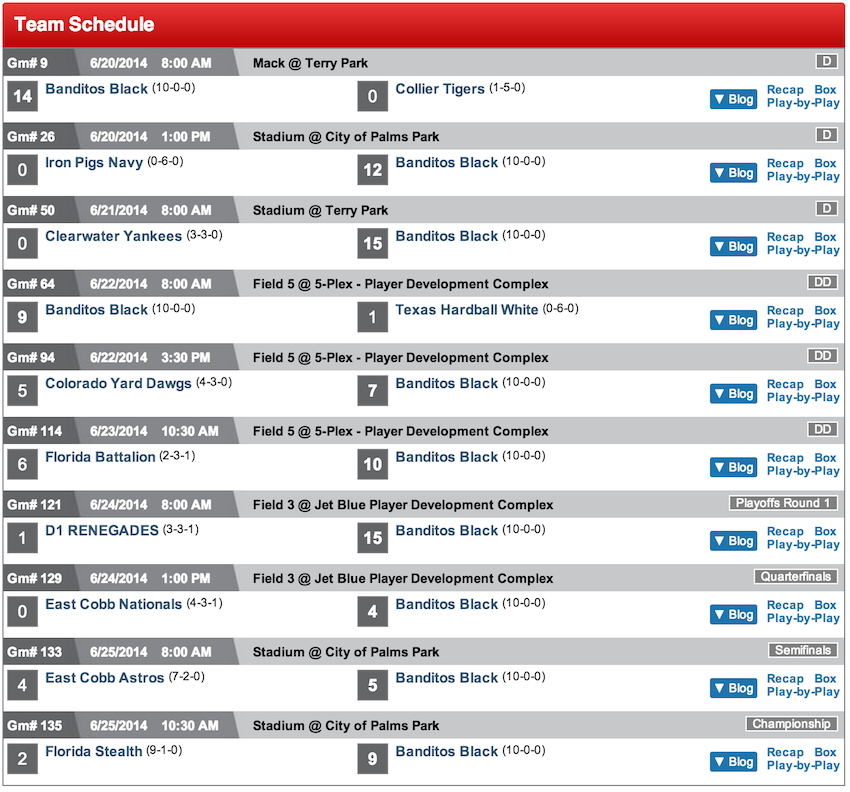 Now you can swim!