You are at:Home»Alumni News»Banks Named SEC Freshman of the Week 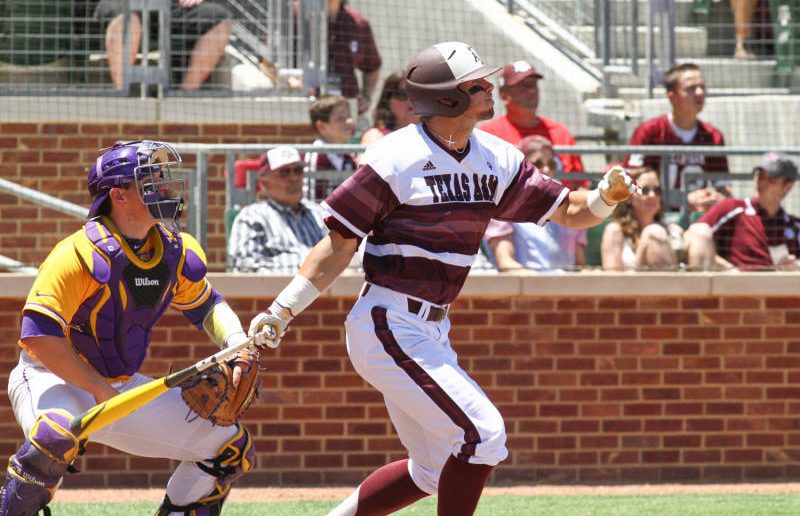 Texas A&M outfielder Nick Banks was tabbed the SEC Freshman of the Week following the Aggies’ 3-1 run, including winning two of three against No. 5 LSU over the weekend.Banks overcame a couple of defensive miscues on the weekend to play a big role in A&M’s series win over the Tigers. In the Aggies’ wins on Saturday and Sunday, Banks went 5-for-7 with two doubles, one run and one RBI.On Saturday, Banks went 2-for-3 with one walk, one double and run in the Maroon and White’s 3-2 win.In Sunday’s series-clinching, 4-3, win against LSU, Banks responded from misplaying a fly ball in the top half of the first inning to knock in a run with a double in the home half of the frame. He added two more hits in the game, going 3-for-4 on the afternoon.For the week, the Tomball native logged three multi-hit games, batting .533 (8-for-15) with two doubles, three runs and three RBI. Banks opened the week by going 3-for-4 with one run and two RBI in a 9-2 midweek win against Texas State.On the year, Banks leads the team with a .351 (52-for-148) batting average. He has eight doubles, two triples, two home runs and 22 RBI on the season. In league play, Banks is hitting a team-high .374 with five doubles, one triple, one home run and 13 RBI.Banks is the first A&M player to earn an SEC weekly honor on the season. Last year, Matt Kent, Hunter Melton and Jonathan Moroney each earned SEC Freshman of the Week recognition once. Daniel Mengden also earned SEC Pitcher of the Week accolades once during the Aggies’ inaugural season in the league.The Aggies are 30-19 on the season, including 12-12 in SEC action. Texas A&M returns to action on Friday as the Aggies travel to Fayetteville for a three-game series against the Arkansas Razorbacks.