You are at:Home»7u-14u»Banditos’ Bats Come Alive to Win 13U NYBC Championship 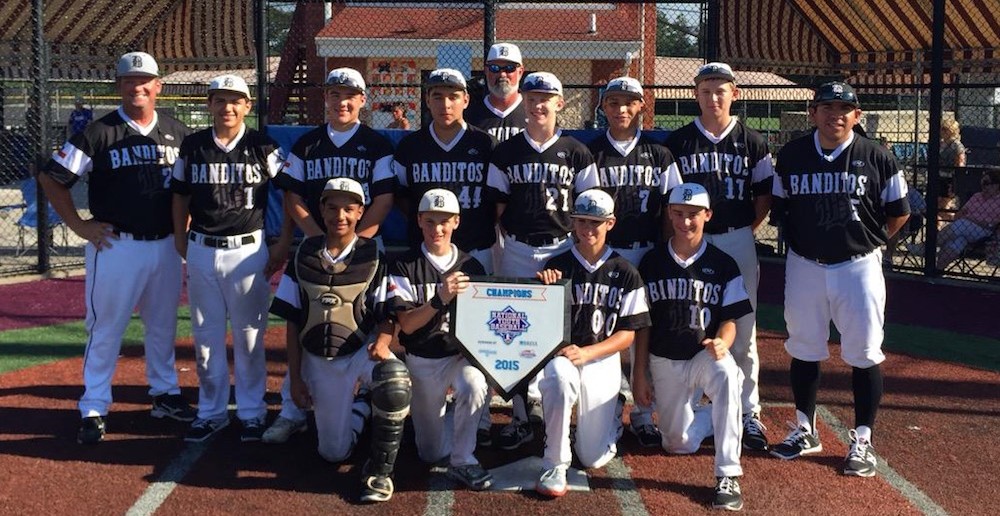 By Traci Deleon on August 3, 2015 0 Comments
The Banditos of Austin, Texas, exploded in the 5th inning, scoring all of their runs in a 5-3 victory over the CT (Connecticut) Edge in the 13U NYBC Championship.

The first four innings were a defensive battle. Both teams struggled getting on base, or getting a hit for that matter, as both starting pitchers had four strikeouts. The CT Edge got on the board first with a solo homerun from Max Mariano in the bottom of the fourth inning.

Banditos Head Coach Victor Trevino said he knew this would be a tough game because of the overall skill level that comes with the popular tournament.

“We new we were coming in and we were going to play good, quality teams and it was going to be tough competition,” Trevino said. “Coming out here we worked really hard all summer long trying to prepare, but nothing can prepare you for some of these teams out here.”

The CT Edge looked to have control of the game at 1-0 as the Banditos couldn’t get a hit. But that all changed when Coach Trevino called for quick team huddle before the 6th inning.

“I just told them I had no doubts whatsoever what was going to happen. If we stick with our game plan, if we continue to work hard and grind it at bat, we were going to get what we want. And we did,” Trevino said.

The very next batter, Catcher Paul Castro hit a ground-rule double right down the foul line. CT Edge argued the call, but the umpire declared the hit was fair.

Two batters later, Pitcher Albert Martinez hit a double and drove in Castro, tying the game at 1-1. The very next batter Leftfielder Jace Grady drove in Martinez, giving the Bandidos a 2-1 lead. Followed by an RBI from Centerfielder Carlos Escamilla, 3rd Baseman Derek Castillo and Castro finished the inning by driving in a run pushing the lead to 5-1.

The Banditos held all of the momentum, but the CT Edge still believed they could pull this one out. In the 6th inning, CT Edge’s Goggin drove in two runs to close the gap to 5-3.

CT Edge looked rejuvenated after cutting into the lead, but the Bandidos held their ground and closed the game out. Winning a championship is a total team effort, but Trevino said it all started with the bat of Castro.

“He’s been a spark for us all day,” Trevino said. “He pitched a heck of a game the first game and really put us over the top here.”

Castro played well and enjoyed every minute of the tournament. He was elated to be a champion and for a moment was at a loss for words from pure excitement.

“It feels great! It was a pleasure being out here,” Castro said. “I liked it a lot! It’s a great experience being a National Champion.”

Castro went on to say how all the hard work paid off and when I asked him how does being a champion feel, he simply said, “It’s everything. It’s an amazing feeling.”