You are at:Home»15u-18u»Banditos Black Win 17u WWBA South Qualifier 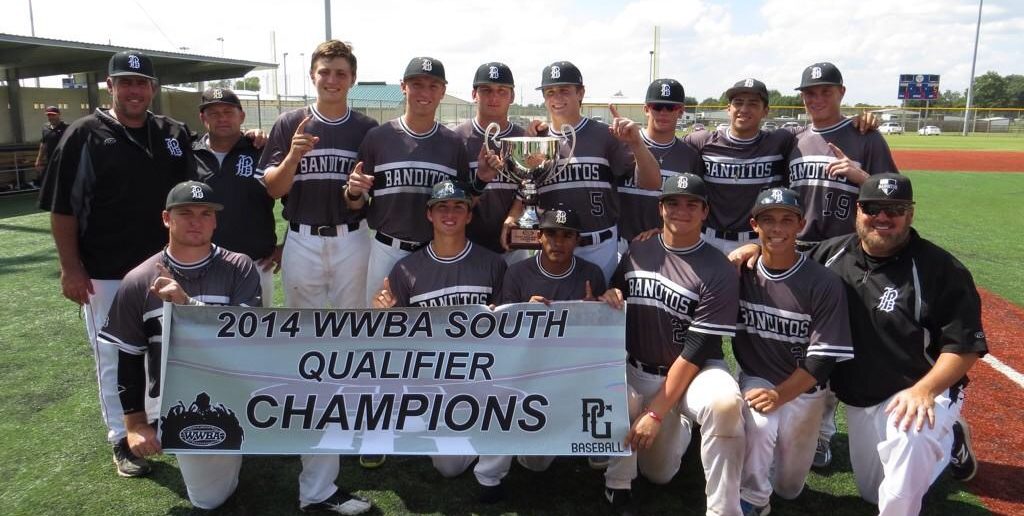 TOMBALL, Texas – Even a quick look up and down the Houston Banditos Black batting order, 1-through-9, reveals a lineup that is as formidable as any unveiled this side of Jupiter, Fla. It’s a lineup that oozes with prospects from the classes of 2015 and 2016 ranked in the top-100 nationally; just about every one of them has made an NCAA Division I commitment.

Because of that – and this is noted without even mentioning a first-rate pitching staff – the Banditos Black came into the Perfect Game WWBA South Qualifier as the pre-tournament favorite, especially considering they had won the previous three.

But a close shave or two during pool-play that resulted in the No. 6 seed in the playoffs, and one really big close call in the tournament’s semifinal round made a fourth straight PG WWBA South Qualifier championship anything but a certainty – until a still closer look at that lineup.

“It’s a team effort; as you can see every day and every game someone does something different,” Houston Banditos founder, owner and head coach Ray DeLeon said Monday. …”We weren’t really worried about the seed, we just wanted to save our arms until the end and try to get there.

“It’s all a team effort, man, and everybody here brings something to the table … and it’s flattering for me to have such a great group that you can just sit over there like you’re on a couch and watch the game play out.”

DeLeon wasn’t exactly watching from a couch but he might as well have been as the sixth-seeded Houston Banditos Black (7-0-0) shot past the No. 4 South Texas Sliders (6-1-0) by a 5-1 count in the championship game of the PG WWBA South Qualifier played Monday afternoon at the Premier Baseball of Texas facility. 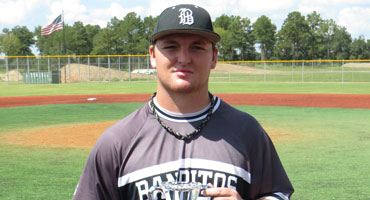 Joe Davis slugged a two-run home run in the second inning – his fifth in seven tournament games – and Andres P. Sosa lined an RBI single as part of a two-run fifth inning and drove in another run with a sacrifice fly in the seventh to pace the victory. Unheralded 2015 right-hander Alfredo Villarreal from Brownsville, Texas, scattered five hits over 6 1/3 innings without allowing an earned run, striking out four and walking none, to holster the win in the championship game.

“This is just one big team effort right here,” Davis said of the championship, echoing his head coach. “Everybody did their part, everybody pitched great, everybody hit, and that’s what we needed to do behind our great pitching. … Pitching kept us in it and then our hitting brought it together.”

The South Qualifier Championship means the Banditos Black will have their freight paid to Jupiter in three weeks to compete in the prestigious PG WWBA World Championship.

This was a team effort in every sense of the words. DeLeon used 14 pitchers to compile a 0.93 ERA over 45 innings pitched, with none of the 14 working more than seven innings. But it was the Banditos Black’s bats that drove opposing pitching staffs, well, batty. They hit .331 as a team (60-for-181) with 22 of those 60 hits going for extra bases, including eight home runs.

Kody Clemens, a 2014 PG All-American, Texas recruit and the son of Roger Clemens, hit only .227 for the tournament but collected a pair of doubles and drove in eight runs, and was 2-for-4 with a double, an RBI and a run scored in the title game.

And then there was the recently slimmed-down Davis, a 6-foot, 220-pound catcher/first baseman from Austin who has committed to the University of Houston. Davis was simply terrific over the last four days, hitting .435 (10-for-23) with five home runs, three doubles, 12 RBI, seven runs scored and a 1.697 OPS, good enough, of course, to earn tournament Most Valuable Player honors.

“Everybody was pulling for me over in the dugout and Roger Clemens has really helped me,” Davis said. “I’ve lost weight (20 pounds over the summer) and that’s actually quickened up my hands and made everything a little easier. With hitting, I’m always getting lessons from Ray (DeLeon) and I just had a good weekend.”

That was understating it a bit, according to DeLeon:

“Davis – we just jumped on his back; he was unconscious. You’re not going to hit five or six home runs and hit (as well as he did) in a tournament like this – he hit everything, I mean he didn’t miss.”

Even with most of his players having already committed to the schools of their choice, DeLeon said it isn’t difficult convincing them to go out and play their hardest – and play well – at the PG WWBA South Qualifier.

“Their schools are still watching them play; they’re all committed but they still have to play good,” he said. “You’ve got to keep playing hard to keep your scholarship. Just because you’ve got a scholarship doesn’t mean you’re going to keep it so you have to go out there and if three or four guys are putting it on it and you’re not putting it on it, they could pull that scholarship right from you any day – and they should.”

The South Texas Sliders advanced to their first Perfect Game tournament championship game riding the arms of a nine-man pitching staff that compiled a 6-1 record with a 0.84 team ERA over 50 innings of work.

2015 left-hander and Rice University recruit Mason Hellums was among the most impressive, finishing 2-0 after nine innings of work in which he didn’t allow a run on three hits and struck out 11 while walking but one.

He picked up his first win Saturday when he came in to pitch the final two innings of a pool-play game and struck out all six batters he faced; he then pitched a complete game, three-hit shutout in the Sliders’ first-round playoff victory. Hellums was named the event’s Most Valuable Pitcher but had to leave for his Corpus Christi home early and wasn’t available for comment.

BOTH THE BANDITOS BLACK AND THE SLIDERS reached the championship game after escaping with grippingly tense victories in Monday morning’s semifinal games, also played at Premier Baseball of Texas.

Standout 2016 shortstop and right-handed pitcher Jaxon Williams, an Arkansas commit from Rosenberg, Texas, smacked a solo home run in the top of the 10th inning to snap and 1-1 tie, and the Sliders held on for a 2-1 win over the top-seeded Austin Banditos (4-1-0) in one of the semifinal games.

Williams, playing his first game for the Sliders at this tournament because of another obligation over the weekend, also picked up the win in relief of starter Blane Hamon, who was pulled after working 5 2/3 efficient, six-hit, one-run innings. Williams went the final 4 1/3 without allowing hit or a run while striking out four and walking one.

Kevin Kopps, a 2015 and another Arkansas commit, gave the Sliders a 1-0 lead with a solo home run in the top of the sixth. The Banditos tied it in the bottom of the sixth on an RBI single from 2015 Texas-San Antonio recruit Bryan Arias.

The Austin Banditos’ pitching staff was sensational over the last four days. Seven pitchers combined to allow three earned runs in 45 innings (0.55 ERA) with 45 strikeouts and 11 walks. 2015 right-hander Weston Seay threw a complete game one-hitter, striking out 12 and walking three, in their 3-1 win over the ninth-seeded Texas Stix Baseball Club-2016 in the quarterfinals.

The Banditos Black scored nine runs over the final four innings to erase an early 4-0 deficit, rallying for a 9-7 win over the No. 2-seeded Texas Drillers from Spring, Texas, in Monday’s other semifinal game at Premier Baseball.

The Drillers (4-1-0) pushed across a pair of runs in both the second and third innings to take a 4-0 lead, and led 4-1 going into the top of the fifth. With the 2016 No. 69-ranked 2016 Sosa delivering a line-drive, three-run home run, the Banditos Black posted a five-spot on the board for short-lived 6-4 lead; the Drillers tied it with two of their own in the bottom of the fifth.

“They always say that hitting is contagious and our case it sure is,” Davis said. “If one person gets a hit, it seems like that inning everybody is going to get a hit.”

Conner Capel, another Texas recruit ranked No. 29 in the national 2016 class, drove in what ultimately proved to be the winning run on a fielder’s choice ground-out in the top of the sixth. The No. 47-ranked Clemens delivered a two-run single in the top of the seventh.

Only two of the Drillers’ six runs were earned. Christian Long drove in a pair of runs and Dillon Degadillo accounted for two of their six hits and drove in a run.

NEXT UP FOR THE BANDITOS IS THE PG WWBA WORLD CHAMPIONSHIP, scheduled for Oct. 23-27 at the Roger Dean Grapefruit League Complex in Jupiter. DeLeon said winning the PG WWBA South Qualifier championship acts like a launching pad into the next three weeks.

“This does prepare for you for the grease,” he said. “Now that’s a different beast out there (in Jupiter). Everybody knows that’s the granddaddy of them all, that’s the Daytona 500, man, that’s the main deal. We all dream of winning that deal and that’s about the only thing we haven’t won yet.

“The odds are unbelievably hard but I wouldn’t put anything past this group because they find a way. They’re not the flashiest or the biggest guys out there, they’re just baseball players and they get it done.”