You are at:Home»15u-18u»Banditos’ Left side, Strong Side 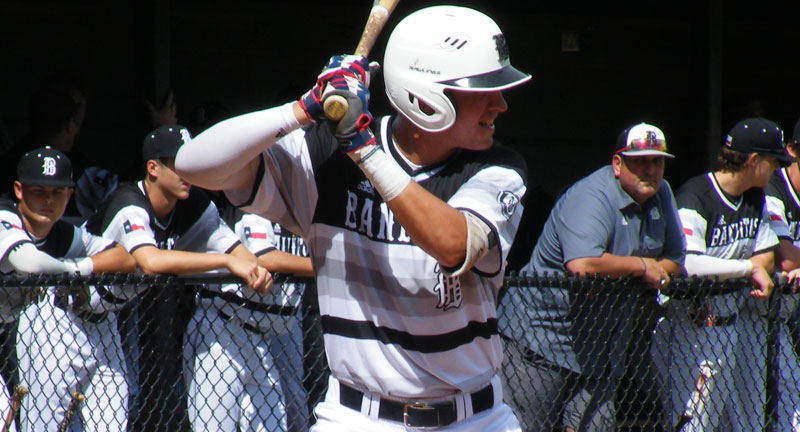 Banditos’ Left side, Strong Side

Banditos’ Left side, Strong Side

Published: Sunday, July 02, 2017
MARIETTA, Ga. – The Houston Banditos Black are back at LakePoint for the 17u WWBA National Championship behind a loaded roster that includes two of the best players in the class of 2018: Jordan Groshans and Hunter Watson.

“It’s been a pleasure,” DeLeon said of coaching Groshans and Watson. “Both those guys are not only phenomenal baseball players, but they’re good kids man, they’re student-athletes, they’re all top of their class, and they’re both Christian athletes and it’s good to have those kids around these other kids, it makes other kids better, but it’s been a pleasure coaching great kids like that.”

“Hitting for sure,” said Watson, a left-handed hitter. “Hitting the breaking ball, Ray’s helped me a lot on that and just footwork. His brother Robert has just really helped me defensively, on working on my defense and just being quicker off the first step.”

The 6-foot-4, 190-pound Groshans, who had a stellar performance at PG National in June, said that although he has grown on the physical and skill side of baseball, it has been on the mental side of the game that he has felt he has improved the most working with DeLeon.

“The biggest thing to me is maturity, realizing that it’s just a game, relax and just play the game that I’ve been playing since I was young and not overstressing,” Groshans said. “Just going out there, have fun and do the right thing.”

All that time with the organization has allowed the two to form a bond, and because they share the left side of the infield, the two said they have been able to get to know each other very well. That friendship extends off the field as well, as the two hang out outside the lines.

“Over the years, playing on the left side of the infield, you’re always talking, and after games we’re always hanging out. Jordan’s just a good dude, and he’s humble, and I think that’s how me and him have bonded, just the humbleness that we share,” Watson said.

Not only have they bonded in terms of friendship, the two have become very comfortable with the other’s style of play. Their communication, both verbal and non-verbal has helped them both succeed on the field, helping them make everything easy.

“It helps us a lot with plays, because we think alike,” Groshans said. “We talk, but we think alike, like I said, so a lot of plays that should be made are made, and it makes everything a lot easier because everything just works really well together and it works smoothly.”

The left side of the infield will be broken up after next season with the two going their separate ways at the next level, as Groshans has committed to Kansas, while Watson will stay in state and attend Texas A&M. Even with the future separation, the two said that they know that they will keep in touch and keep that bond that they have formed.

Groshans and Watson will hope to attend another event together as both are two of five players on the Banditos Black to be named to the Perfect Game All-American Classic watch list. Jonathan Childress, Ty Madden and Marcelo Perez are the others that are on the list, speaking to the level of talent that this team possesses.

Only 50 players are chosen from the watch list to participate in the Classic, which will be aired on MLB Network on Sunday, August 13 at 5:00 p.m. PDT. The selection show will take place on Tuesday, July 11 at 11:00 a.m. ET, and both are eagerly awaiting if they will be chosen for the event.

“It was a blessing and an honor for sure. Seeing all those guys that are in the big leagues now that played in that, the guys from last year’s, it is an honor to be a candidate for that and have the opportunity,” Watson said. “You know the thing that sticks out most to me is the Rady’s Children thing they do with the hospital. I think that’s pretty cool to get to do that and go see all those kids at the hospital and get to hang out with them.”

“It’s an awesome experience, you play with the best guys in the nation, you see the best talent, the best arms, best hitters, and you know where you can compare yourself to others,” Groshans said about what he knows the Classic can offer. “It’d be a blessing and a huge honor, because I know the top athletes, the top 50 kids in the nation compete every year there.”

The two will look to increase their chances of being named as they continue to compete in the 17u WWBA, and so far, their team is off to a 2-0 record. Their first win came in a game that did not end until about 3:00 a.m. on Sunday. Although the time might have affected them a little bit, they still won by a score of 6-2. Afternoon baseball followed up the twilight game, as the team beat PAL Elite 4-0. Their next game will come at 9:30 p.m. on Sunday, making it their third game of the day. Although the games were sort of uncharacteristic for the potent lineup of the Banditos, DeLeon offered what he thought was needed from his team.

“We need to hit. Good pitching always beats good hitting,” he said. “We just got to hit better, because good pitching will shut down every good hitter, and we see everybody’s No. 1s, so it’s tough to hit when you’re seeing everyone’s No. 1, and with the wood bat being the equalizer, it’s tough. The wood bat’s tough to handle. That’s why these Perfect Game tournaments are awesome. This is all we play. There’s not a better venue than Perfect Game in the country to get your kid better for pro ball than playing with the wood bat.”