You are at:Home»News»Banditos Nab 14u Perfect Game World Series Title 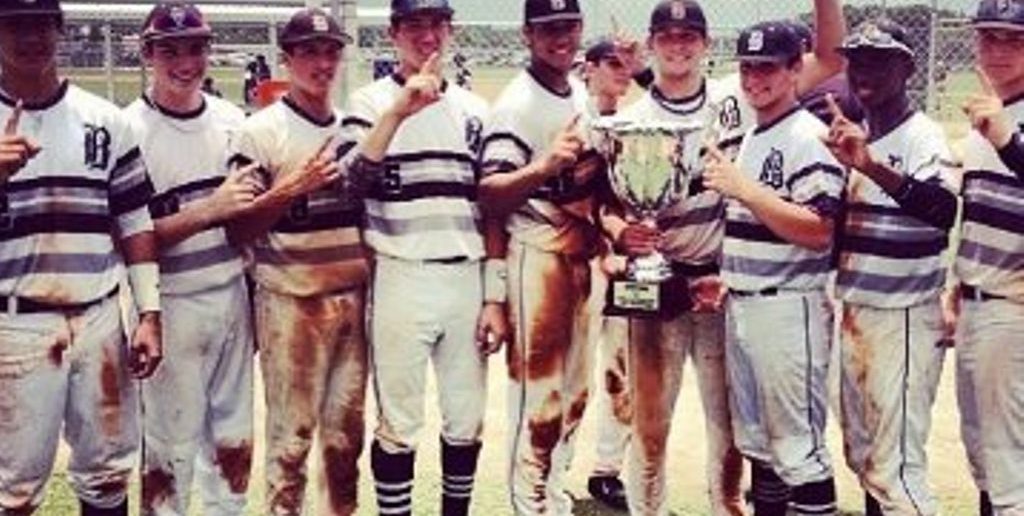 FORT MYERS, Fla. — For 7 2/3 innings Saturday afternoon, the Houston Banditos were like putty in the hands of Georgia Jackets’ right-hander Blake James.

Using a baffling mixture of 72 mph fastballs and 65 mph changeups and curveballs, James held the slugging Banditos hitless while collecting 23 outs in the championship game at the 14u Perfect Game World Series, played at the jetBlue Player Development Complex. Thanks to a run in the top of the eighth, the Jackets were clinging mightily to a 1-0 lead with two outs in the bottom of the frame.

And then, in what seemed like an instant to most but must have seemed like an hour to James, the magic disappeared: the Banditos’ Landon Miner laced a single to right field; Tyler Hicks followed with a choppy, groundball single to left; Jaxx Groshans reached on an error to load the bases; and, finally, James plucked Thomas Burbank with a pitch to force in the tying run.

With two balls on the next Banditos hitter, Hunter Watson, the Jackets made a pitching change and James, a 2016 from Clarksville, Md., walked off to applause from the Jackets’ sizable cheering section. But Watson ultimately received a base on balls, and the Banditos had claimed the 14u Perfect Game World Series national championship, 2-1, after one of the wackiest finishes to a PG championship game in memory.

“We finally came around at the end,” Banditos Baseball Club founder and head coach Ray DeLeon said. “We saw some good pitching (all week); this is a great tournament, we battled and these kids came through.”

Banditos righty Dylan Bohnert (2016, Anderson, Texas) was nearly as stingy as James in the title game, allowing no earned runs on seven hits while working eight innings, striking out six and walking one.

The Banditos (7-1) advanced to Saturday’s 14u final four by winning five of six pool-play games  Tuesday through Friday at the 14-team championship; they started their run to the crown by beating these same Georgia Jackets (6-2) in  the tournament opener, 6-1.

DeLeon pointed out that the Banditos had to come from behind in five of their seven wins down here this week, including both the semifinal and championship game victories on Saturday.

“These kids don’t understand that playing with the wood bat, it’s a different ballgame,” he said. “The wood bat eliminates all those cheap, aluminum bat hits, and that’s why big-leaguers make so much money because they know how to hit with a wood bat. It takes a special kid to learn how to hit with it.”

One kid who has apparently learned to hit with wood pretty well is Banditos utility man Samuel “Tyler” Hicks, a 2016 out of Spring, Texas. Hicks was named the tournament’s Most Valuable Player after hitting .474 (9-for-19) with three doubles, a home run, seven RBI, five runs scored and a 1.325 OPS.

The Banditos dedicated the championship to the memory of Austin Woodfin, a 17-year-old Bandito who was killed in a tragic traffic accident on Aug. 1 back home in Kerr County, Texas. Four other teenagers in the same vehicle, including  two that are also part of the Banditos organization, remain hospitalized.

“These guys were shocked,” at the news, DeLeon said of his young team. “Austin was working out with these guys two weeks ago and throwing us batting practice, and now he’s dead. It hit home, and these kids understand that life is precious and these moments, they don’t come very often.

“We’re a tight-knit Bandito family and we stuck together and we got us a (PG national championship) title; we got us a ring.”

Left-hander Chaney Rogers (2017, Ringgold, Ga.) threw a complete game, seven-strikeout, five-hit shutout and Kale Ledford (2017, Oxford, Ga.) delivered a sacrifice fly in the top of the first inning to lead the Georgia Jackets to a 1-0 win over Xtreme Baseball (5-2) in a 14u semifinal Saturday morning.

Hicks smashed a three-run home run to highlight a five-run fourth inning, and the Banditos erased a 1-0 deficit en route to a 6-1 win over the MBA Pride Elite (4-2-1) in the other 14u semifinal. The Banditos totaled seven hits in the game and five went for extra bases.

Miner scattered six hits over seven innings, with eight strikeouts and one walk. Jose Ciccarello (2017, Tampa) had two of the MBA Pride Elite’s six hits and scored their only run in the top of the third.

DeLeon is looking forward to coaching this young group of Banditos for the next three years; they just might have the manpower and the mettle to pick up a few more PG national championships as they get older.

This Banditos roster included a couple of prospects from the class of 2018 (eighth-graders in the fall): Burbank, from Beaumont, Texas, and Watson, from Denison, Texas. Burbank, a left-hander, pitched 11 innings this week and allowed only two hits and three walks while striking out 18.

“This is our future; this is one of the best teams in our organization,” he said, invoking the names of class of 2012 Banditos standouts Courtney Hawkins, C.J. Hinojosa and Nick Williams. “These guys are the guys and they’ve got to learn to be in the grease at an early age. Perfect Game enables us to come out here and show that we’re the best in the country. We can honestly say that we are the best team in the country today. It doesn’t matter how you win them — it ain’t over until the fat lady sings.”