You are at:Home»15u-18u»Banditos Open 17u Perfect Game World Series With a Bang 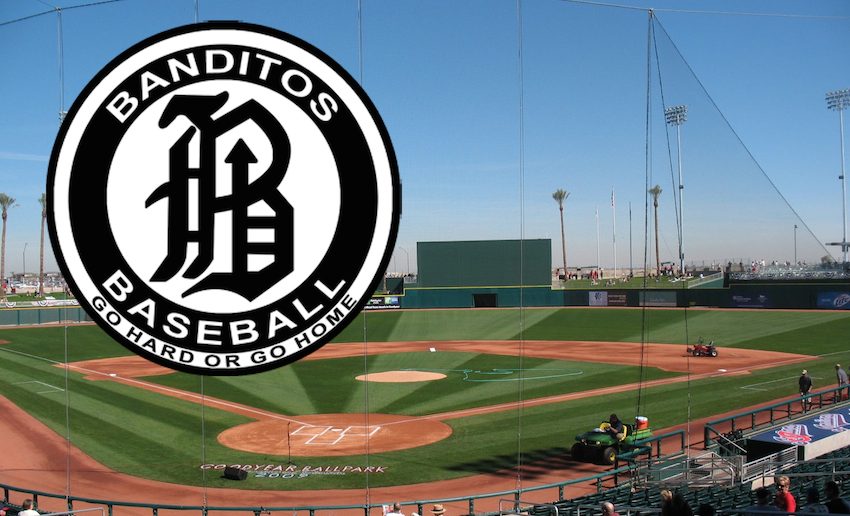 Banditos Open 17u Perfect Game World Series With a Bang

The 3rd Annual 2014 17u Perfect Game World Series started with a bang for the Houston Banditos as they move to 2-0 on the first day of pool play.  Saturday’s games featured huge wins over the AZ Prowlers (7-1) and Tri-State Arsenal (9-0).

In the 7-1 win over the Prowlers, Joe Davis, Conner Capel and Michael Smith had two knocks apiece, and Kody Clemens grabbed a pair of RBI’s.  Nolan Bond and Tyler Pinkston handled the mound duties, allowing 1 run with 8 K’s between them.

The Banditos are back in action Sunday with a day-night double header.   The first game is at 9:00 AM against a loaded CBA Marucci team out of California.  Game two is at 6:00 PM, when the Boys in Black take on another squad filled with D1 signees in the West Coast Mariners out of Oregon.

The 3rd annual 17u PG World Series got under way on Saturday (July 19) with 20 teams.  The Perfect Game national championship tournament event is scheduled to run Saturday through Wednesday (July 23).

The 20 teams invited to participate in this elite tournament come from 10 states, including those from the East Coast states of Florida, Virginia, Georgia and New Jersey. Arizona, California, Pennsylvania, Texas, Utah and Oregon are also represented.

All games will be played at the Goodyear Ballpark Complex, the Cactus League spring training home of the Cleveland Indians and Cincinnati Reds.

Perfect Game tournament officials are trying something new with the 17u PGWS format this year, and it certainly looks intriguing. The 20 teams will be divided into four, five-team pools right from the get-go and each team will play a pair of double-headers within their pool on Saturday (July 19) and Sunday (July 20).

After only two years on the Perfect Game national championship tournament schedule, the 17u PG World Series has already established itself as an event that the country’s most prominent travel ball programs want to be invited to; this year’s 20-team field is truly the best yet.

The Houston (Texas) Banditos and Elite Squad Baseball from Pembroke Pines, Fla., boast rosters with five top-96 prospects from both the 2015 and 2016 classes.