EMERSON, Ga. – The Banditos Scout Team bested the Kangaroo Court Roos 8-6 on Friday to take home the 2018 13u Perfect Game World Series. The Banditos were able to claw back and win in comeback fashion.

Congrats to @BanditoBaseball on winning the 13U PG World Series! Such a talented event and great competition! pic.twitter.com/WFtNpeyyPx

With both teams running low on pitching this late in the tournament, it was going to come down to who could swing it and play the best defense. After the Roos staked themselves out to an early 5-1 lead, Banditos answered with three runs in the bottom of the third inning.

Conner Bennett was able to lead off the inning with a single, one of his two on the day. After finding a way to load the bases, Banditos was able to draw two walks and hit by pitch to claw back to within one with two outs.

Bennett was able to ignite the rally in the third, and was a catalyst in the Banditos lineup all week. Bennett had a home run and tallied 19 RBI on what was a standout week. Head coach Ray DeLeon believes this is just the start of great things to come for his catcher.

Bennett felt like he was seeing the ball well all week, and credits his teammates ability to get on base for his success.

“It was a lot of fun,” said Bennett. “It’s really easy to get RBI when I know my leadoff and two-hole hitter are going to be on base. They give me a chance to score runs.”

The back and forth affair would head to the bottom of the sixth deadlocked at 6-6 before Nicodemus Ruedas delivered the biggest hit of the tournament for his team. His single up the middle broke the tie, and Andre Landry IV would follow it up with a single of his own, giving Banditos an 8-6 lead with three outs to get.

“Miguel had played two innings the whole weekend. I told him that this was his time to show everybody that you never know when its your time,” said DeLeon. “We gave him the opportunity to do something special and that is exactly what he did. He shut down a great hitting team.”

Banditos has historically proved their metal against some of the best teams across the country, and DeLeon believes there is more to come from the organization as this summer moves along.

“Perfect Game puts on a great tournament for the best of the best. All the best teams were here, and we were able to walk out as number one.” 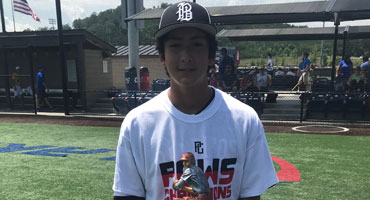 The tournament’s MV-Pitcher came from this Banditos team in Brennan Greer. Greer compiled a 2-0 record for the week, tossing eight shutout innings and striking out eight batters.

The MVP came in the likes of Roos three-hole hitter Aidan Miller. Miller was 13-for-16 on the weekend, hitting two homeruns and collecting 12 RBI. Miller started a perfect 10-for-10 in the tournament, and delivered one of the most memorable performances in an event this summer.