EMERSON, Ga. – In early Monday morning action, the Banditos Elite and the Evoshield Canes Central faced off to determine who would walk away with the Freshman World Championship crown.

Each team first had to win their semifinal game braving strong winds and unusually cold Georgia temperatures. The Banditos topped the Carolina Vipers 5-1 to advance and the Canes moved past the No. 3 ranked East Coast Sox Prime 6-2 in their game. The Banditos Elite earned the win and the Championship with an 8-1 victory thanks to dominant pitching and timely hitting.

With both teams trying to stay warm, started play to battle it out. The top-seeded Banditos took the field with starter Matthew Thompson. Thompson worked a quick first inning with an electric fastball that topped out at 88 mph and a sharp curveball that sat in the mid-60s.

The Canes sent out lefty J.D. Brock who worked around a two-out walk to throw a clean first frame. At the plate, Brock helped his own cause with a bloop single down the line with two outs and advanced to second on a wild pitch, but he was stranded there to end the top of the second.

In the top of the third, the Canes compiled a quick two-out rally. Scotty Diekman reached on an error by the third basemen and Patrick Alvarez singled him home to cut the deficit to one run.

After a pair of walks to open up the bottom of the third, Alexander Lopez lifted a two-run double to 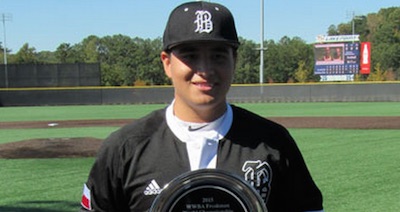 the gap, but he was picked off of second base. Freeman knocked his second double of the game with a sinking line drive, then advanced to second on an Elliot groundball. Anthony Volpe delivered an RBI single to center to plate Freeman and make the score 5-1 through three innings.

Thompson worked a quick fourth inning only seeing a runner advance on an error then he proceeded to strike out the side.

In the top of the fifth the Banditos broke the game open. The led it off with a walk and Freeman delivered his third hit of the game to have runners on first and second. Volpe singled to right to score Lopez and set up runners on the corners with one out. With Colton Olasin at the plate, the Banditos executed a double steal which brought home Freeman. Volpe came around to score on an error by the Canes’ shortstop to make the score 8-1 at the end of the fifth.

The sixth inning went by quickly. Bryson Lucas came in to relieve Thompson and fired 1 1/3 scoreless innings to close out the game.

The Banditos made a mad dash for their pitcher and celebrated the win with a dogpile just to the left of the pitcher’s mound. It was a deserving spot to celebrate as the Banditos received dominant pitching throughout the playoffs.

Jacob Shaver fired a no-hitter in their quarterfinal game, MV-Pitcher Oscar Moralez tossed a one-hitter in the semifinal game with 12 strikeouts and Thompson fired 5 2/3 lights out innings in the championship game. As a whole, their pitching staff combined to toss 37 innings allowing only one ear 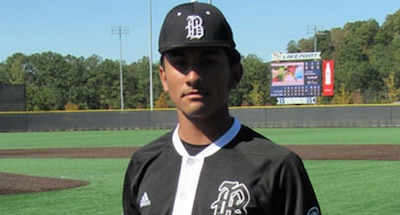 ned run and striking out an incredible 53 batters.

Offensively for the Banditos, they were led by Alexander Lopez who was named MVP. He hit .500 for the tournament with a pair of doubles, five RBI, five runs scored and three walks.

“Pitching, pitching, pitching and more pitching,” were the first words Banditos’ head coach Ray DeLeon uttered after the win. “It’s a great group of kids, they all play together and there isn’t really an MVP.”

DeLeon closed his remarks with one eye on the future. “You start building from the youth, this is going to be a great group for the next two or three years.”