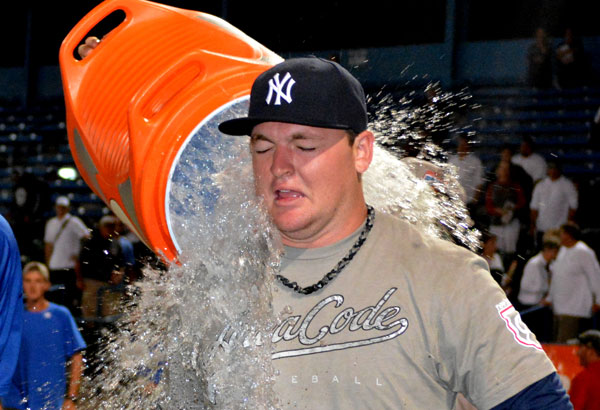 Joe Davis gets the Gatorade shower from his Yankee teammates after winning the home run derby. (Photo: Scott Kurtz)
15u-18u

By Traci Deleon on August 7, 2014 0 Comments
Joe Davis gets the Gatorade shower from his Yankee teammates after winning the home run derby. (Photo: Scott Kurtz)

It was the inaugural Area Code Baseball Homer Run Derby presented by Marucci at Blair Field on Thursday night. One player, from each team, slugged it out to the title of Area Code Baseball home run king. To say Blair Field is big, well that would be an understatement. It is 348 down the lines and 400 to dead center. Add the breeze that comes in off the ocean and the marine layer and Blair becomes even larger. The eight participants were: Chris Betts (Brewers), Jake Thurber (Royals), Luke Miller (Yankees), Joe Davis (Yankees), Brandt Stallings (Nationals), Alan Garcia-Mayer (Reds), Nick Oar (Athletics) and Michael Hickman (Rangers). The format mirrored the MLB All-Star Weekend format. There was a bracket of four players each and it went until a champion was crowned. A temporary fence was brought in (25 feet) and if a ball went over that fence it was worth one point, and if someone could get it out of the park then it was worth two. Joe Davis, the eventual winner, stole the show. He beat local favorite, Chris Betts (who blasted one off the scoreboard in the final round) 6-4 to take it. The winning blast, was an absolute no doubter. Davis also hit the most out of the park with three. “Well, I guess in a way I was trying to conserve energy,” remarked Davis on the slow start. “I loosened up and the balls just started flying.” If you saw where he hit his out most of his power was from center field to right field, tremendous power to the opposite field. The lone ball he hit to the left side was the game winner. Davis is a 6-foot, 220 pound catcher out of Bowie High School in Austin, Texas. “It’s going to be something that I will never forget,” he said, “it was a great experience and even being invited to this let along winning the home run derby. “I know I was the first choice for our team, but I did us proud.” That he did. And something else he did, make Blair look small.