You are at:Home»15u-18u»Cole McKay Receives Baseball America Pitcher of the Year 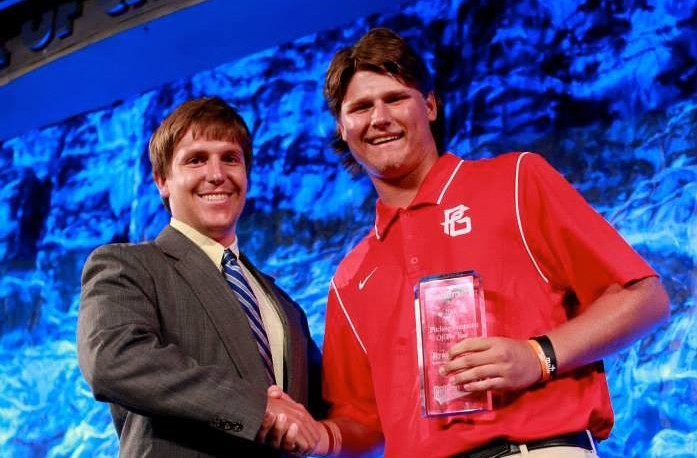 The annual dinner banquet as part of the Perfect Game All-American Classic was conducted on Saturday evening at the San Diego Hall of Champions.  Daron Sutton served as the emcee while San Diego Padres great Trevor Hoffman was the Honorary Chairman.  Here are the award recipients:

Jeff Dahn will have a more detailed feature from the awards banquet and Daz Cameron, the Jackie Robinson Player of the Year, on Sunday.

View pictures of all of the award winners on the event’s Flickr page.

McKay stands tall among an impressive group of Texas flamethrowers in the 2015 class. He uses his 6-foot-5 frame well to generate good downhill leverage to drive the baseball downhill which adds to the difficulty that opposing hitters have trying to hit his low- to mid-90s fastball and power curveball. When McKay is on and hitting his spots he’s nearly unhittable.

The 6-foot-5, 215-pound McKay has a strong, physical build made to handle innings, which is typical of his Texas roots. McKay is a power pitcher with some feel to pitch. The quick-armed McKay has sat 92-93 from the first base side of the rubber in short stints, touching 94 with late riding life through the zone to his hairy fastball. His fastball has sat in the low 90s over extended innings. Both his curveball and changeup show at least above-average potential, with his changeup flashing considerable tumble. The Louisiana State commit has shown feel for mixing all three offerings. He hails from an athletic family with a sister that is a Division I volleyball player and a father that played tennis professionally.