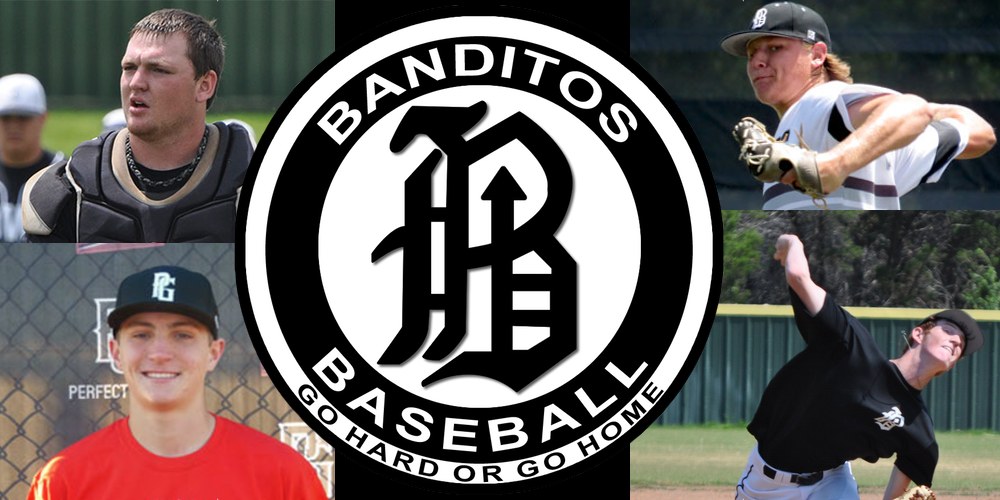 By Banditos Admin on February 17, 2015 0 Comments
Regional HS Preview: Texahoma
Published: Monday, February 16, 2015
2015 Perfect Game High School Baseball Preview IndexFor all of Perfect Game’s regional previews as part of the 2015 high school baseball preview content, the Dream Team is available for free. The region top tools can be viewed with an Insider subscription. To learn more about Perfect Game’s subscription packages and to sign up today please visit this link.

The state of Texas has 11 2014 Perfect Game All-Americans and could have legitimately had at least two more in catcher Garrett Wolforth, who re-classified to the 2015 class in the fall, and infielder Kyler Murray, who has spent so much time on the football field that it is difficult to fully evaluate his baseball skills. That’s an impressively deep group of talent in one class and one that will keep scouts busy all spring criss-crossing the state. Not surprisingly with this state, the talent theme is generally power bats and power arms.

Oklahoma is part of this region, too, and would have been well represented a couple of years ago with top prospects such as Dylan Bundy, Archie Bradley and J.T. Realmuto. However, the Sooner State is in a bit of a slump in the top prospect category for this year and next and does not have a player on the team. Carl Albert High School catcher/righthander Corey Zangari has shown flashes of big-time power and a mid-90s fastball and compares to Texas’ Luken Baker in many ways without the same polish to his game. Yukon High School outfielder Keegan Meyn is a high-level athlete who also will get plenty of scouting attention this spring.

C – Garrett Wolforth, Sr., Concordia Lutheran (Texas)
Wolforth was originally a member of the 2016 class but is a 4.0 student who re-classified for academic reasons before signing with Dallas Baptist. He has some of the best raw arm strength to come along on a prospect in the last decade but is far more than that as a player. Wolforth is a switch-hitter who has pretty equal bat speed from both sides of the plate and will continue to develop his power as he gets stronger and gets more timing repetitions. Baseball runs in the Wolforth family as well his father, Ron, runs a national known pitching/throwing school named Texas Baseball Ranch, while his mother, Jill, was a Academic All-American softball player.

1B – Joe Davis, Sr., Bowie (Texas)
The 6-foot, 220-pound Davis has spent much of his high school career behind the plate but has been playing more and more first base in the last year and that’s the position he projects to play at the next level. As with any standout first baseman, Davis’ bat is his best tool. His righthanded swing packs enormous raw power and it’s power that shows up in games consistently. But Davis is also a mature hitter who makes consistent contact against good pitching and should hit for a high average as well. The Houston signee bears more than a passing resemblance to Oakland A’s first baseman/designated hitter and former first round pick Billy Butler.

MIF – Kyler Murray, Sr., Allen (Texas)
Murray is one of the big wildcards heading into the draft season because so few people have seen him play baseball, although no one questions his dynamic athletic ability. The Texas A&M signee is considered the top dual-threat quarterback in the country and has put up some incredible numbers on the gridiron the past two seasons, including 7,640 total passing yards and 91 touchdown passes to go with 2,737 rushing yards and 42 addition touchdowns on the ground. On the baseball field Murray hit .432-8-31 with 21 stolen bases. There is plenty of baseball in Murray’s background as his father Kevin was an 11th round draft pick, and his uncle, Calvin, played six years in the Major Leagues.

MIF – Lucas Wakamatsu, Sr., Keller (Texas)
A very projectable switch-hitting infielder, Wakamatsu is the son of former Major League catcher and manager Don Wakamatsu. Lucas has present bat speed from both sides of the plate that is just going to keep improving as he fills out his 6-foot-3, 185-pound frame. Wakamatsu also runs a 6.7 60-yard dash and is agile and athletic in the middle infield. He is signed to attend Rice.

3B – Ke’Bryan Hayes, Sr., Concordia Lutheran (Texas)
Hayes gives this Dream Team’s infield two sons of former big leaguers, with Kody Clemens from Memorial High School drawing strong consideration to make that a trio. Strong and powerfully built at 6-foot-1, 207-pounds, Hayes has the strength and leverage to create big bat speed at the plate but is a surprisingly nimble and polished defender at third base as well. He was a standout for the USA National 18u team this past year along with being a Perfect Game All-American.

OF – Trenton Clark, Sr., Richland (Texas)
Clark was unrecognized nationally at the start of last summer but his performances at the Tournament of Stars, the PG All-American Classic and for the USA National 18u team have made him the 10th ranked player in the 2015 PG class rankings. He has a high level of strength, speed and athleticism, but what sets him apart is that he also has a mature understanding of the game, especially on offense. He’s the type of player who is likely to lead leagues in either walks or on-base percentage in the future.

OF – Mitchell Hansen, Sr., Plano (Texas)
Projection is usually a term associated with young pitchers but Hansen is a perfect example of projection in a young outfielder. He has a long and lean 6-foot-4, 200-pound build that is going to keep filling out and already has plenty of tools and skills to build on. In addition, he’s split time between the football field as a wide receiver and the baseball field in the past and will now be turning his full attention to baseball. The Perfect Game All-American is also a 4.0 student in the classroom and has signed with Stanford.

OF – Ryan Johnson, Sr., College Station (Texas)
College Station High School enters the season as the highest ranked team from Texas in the PG national rankings at No. 6 in the country and looks for Johnson to enable them to repeat as state 3A champions. Johnson has been nationally known as a powerful lefthanded hitter since early in his high school career but improved his overall athletic ability significantly over the past year. The result is that Johnson has gone from a player who projected as a first baseman at the upper levels of the game to a quality right field candidate with 6.8 speed and a big throwing arm. Still, it all comes down to the bat and Johnson’s combines big bat speed with lift and power potential.

UT – Christifer Andritsos, Sr., The Woodlands (Texas)
Andritsos has been a two-way standout on the baseball field, along with being a high-level quarterback in the fall, since the start of his sophomore season. He batted .388-12-43 as a sophomore and topped that with a .453-11-35 season as a junior. Despite his hitting ability, Andritsos was a PG All-American as a righthanded pitcher, with a fastball that gets up to 94 mph to go with a sharp curveball. He went a perfect 10-0, 1.50 last season on the mound while posting 107 strikeouts. Andritsos is signed with Oklahoma.

There were no shortage of two-way talents to choose from in this region, as Hayes and Johnson and Luken Baker (listed below as a pitcher) also have legitimate two-way ability, at least when projecting their talents at the college level.

P – Beau Burrows, Sr., Weatherford (Texas)
Burrows has evolved from a max effort thrower to a polished and well rounded pitcher over the last two years and is currently the second ranked righthander in the 2015 PG class rankings. His fastball regularly registers in the mid-90s but he has made significant strides with his curveball and changeup, not to mention his overall command and ability to mix pitches. The performance is there too, as Burrows has a high school record of 23-4, 1.26, including a 5-1, 0.75 mark last spring with 101 strikeouts in 55 innings. He also won the Most Valuable Pitcher award at the 300-plus team 17u WWBA National Championship last summer pitching for the EvoShield Canes.

P – Cole McKay, Sr., Smithson Valley (Texas)
McKay (pronouced “McKye”) is a big, physically mature 6-foot-5, 230-pound righthander with an approach to pitching that is equally mature. He throws from a smooth and loose delivery that produces a fastball up to 95 mph that will comfortably sit in the low-90s with big running life. McKay also is comfortable throwing both an upper-70s curveball and a low-80s changeup and is efficient in filling up the strike zone. He received the Baseball America Pitcher of the Year award as part of the PG All-American Classic ceremonies and is signed with Louisiana State.

P – Luken Baker, Sr., Oak Ridge (Texas)
Baker is an enormously strong athlete who looks significantly bigger than his listed 6-foot-4, 240-pound size. He and fellow PG All-American Christifer Andritsos could easily switch positions on the this team, with Baker assuming the utility role, due to his own exploits and talents as a dual threat, which includes winning the home run derby at the the Major League All-Star Game “Junior” Home Run Derby. But like Andritsos, Baker’s future is on the mound. He throws a heavy fastball that reaches 95 mph, plus a hard low-80s slider that has very good depth at times. He may get a shot at playing two ways if he decides against professional baseball this year and attends Texas Christian.

P – Antonio Santillan, Sr., Arlington (Texas)
Santillan’s physical tools and background are eerily similar to the Texas Rangers recently acquired right handed pitcher Yovani Gallardo, also a Metroplex resident of Mexican heritage. He is a two-way standout at Arlington High School and was named all-district as a 6-foot-3, 195-pound shortstop although his future is clearly on the mound. Santillan throws in the 91-94 mph range on his fastball with outstanding life to go with a hard upper-70s breaking ball with hard and tight spin.

P – Mason Thompson, Jr., Round Rock (Texas)
Thompson and Coppell HS right hander Charles King are considered the two top junior pitchers in the region and either would be a worthy pick at this spot. King has a tick better present stuff but Thompson and his highly projectable 6-foot-7, 190-pound body has a better combination of projectability and present pitchability. Thompson can reach the low-90s now with more on the way but is also a polished young pitcher with a three-pitch mix and international experience pitching for the USA National 15u team.