You are at:Home»7u-14u»Hunter Watson: The phenom next door 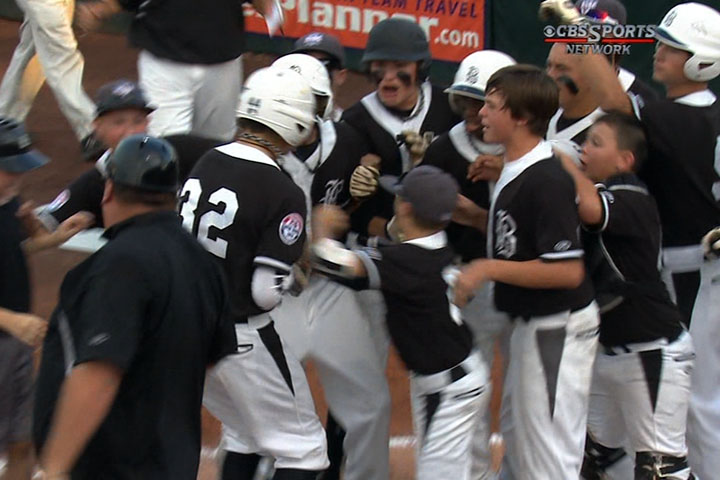 Hunter Watson: The phenom next door

Fourteen-year-old Hunter Watson lives on Easy Street in south Denison. His house is an elegantly appointed but modest ranch style abode that wouldn’t seem out of place in countless suburbs in countless towns across the country. His bedroom looks like the bedrooms of most 14-year-old boys (allowing for the well-made bed and lack of clothes on the floor one suspects might be temporary for the benefit of his visitor).

Above his bed hangs a signed picture of Texas A&M quarterback Johnny Manziel. On another wall, there’s a framed image of Washington Nationals outfielder Bryce Harper — an interesting choice of idol for a Texas kid whose dad loves the Rangers, but it’s the first, small clue that this bedroom doesn’t belong to your average 14-year-old.

In the corner, there’s a bookshelf with a prominently displayed ring that looks like a prop from Goodfellas. On the ring, a jewel encrusted “B” for Banditos, as in the Houston Banditos. That’s Watson’s select baseball team, and not coincidentally, they were the 2012 National Youth Baseball 12U champions.

Hunter Watson doesn’t just live on Easy Street, he hits baseballs there too.

“I’ve been doing this 20 years, and Hunter has as much potential as anyone I’ve ever coached,” says Ray DeLeon, skipper of the Banditos. “I think he’s going to be better than Harper.”

For the uninitiated, that would be Bryce Harper: the kid who made the cover of Sports Illustrated at 16, left high school early to play college ball, was selected No. 1 overall by the Nationals, and last year put together the best professional baseball season any 19-year-old has ever had.

And DeLeon’s opinion here carries quite a bit of weight; he coached against Harper and has put numerous players into the pros, including Kohl Stewart — the fourth overall draft pick by the Minnesota Twins last June — and Paul Goldschmidt, who hit 36 homeruns this year for the Arizona Diamondbacks.

Hunter Watson won’t be able to drive a car for another 23 months. At an age where most kids simply hope to get through each day without embarrassing themselves, Watson’s been chatted-up by professional scouts from the Mariners and Braves, not to mention eager college recruiters from LSU, TCU, and his preferred Texas A&M Aggies.

It might be heady stuff for an adolescent. But to hear the teachers and administrators at Denison’s B. McDaniel Middle School tell it, Watson displays none of the bravado society has come to expect as part and parcel of athletic talent.

“Hunter is one of those kids who just excels everywhere. He does his best in the classroom; he is friendly; he’s conscientious; he’s polite. He’s the kind of kid who, even when everyone else is making fun of someone, he will help the kid when no one else will,” said B. McDaniel Assistant Principal Vicki Woody. “I think with Hunter it’s just innate; it’s who he is. The expectations and example set by his family just keep him grounded.”

That family — father Cory, mother Adriana, and brothers Grayson, 9, and Tripp, 2 — is a recurring asset listed by those close to Hunter.

“I always tell parents when they step in my door, ‘Just remember that your kid’s only half as good as you think he is,’” said DeLeon. “For the Watsons, that doesn’t apply to them. They’re very humble people. I just can’t believe that this kid is so good and the whole family is just a humble family.”

“Hunter takes a lot of pride in just treating people right,” said Cory Watson, himself a solid player who attended Grayson County College in the 1990s on a baseball scholarship. “He doesn’t see himself as any better than anybody else. He’s a genuine person and just treats people right. And that’s something that above everything else, we really appreciate about him. It’s just his nature. He’s a softhearted kid.”

It’s that combination — “Aw shucks,” North Texas humility and work ethic in the person of a 6’3” man-child with the frame of a cruiserweight boxer and a compact, powerful swing that two-time American League MVP Frank Thomas labeled “sweet” — that makes the ceiling for Hunter Watson astronomical, according to his coach.

“First of all, you’ll never see a 14-year-old kid in the country that has as much power from the left side as Hunter Watson,” said DeLeon. “But more than that, he’s got one of the best makeups of any kid I’ve ever had. He’s got the makeup that pro scouts look for.”

That potential, enough potential to put Watson in the early conversation for the first round of the 2018 MLB Entry Draft, makes weekly trips from Denison to Houston and back worth the 10-hour drive, said Cory Watson.

“The deal with Hunter is he’s a motivated kid. There’s times we may not get back (from Houston) until three in the morning from a long tournament. He gets up at seven to go to school, he comes back home and by 5 p.m. he’s ready to go to the batting cages and hit. He knows he’s a good player but he’s not content.”

Ken Cates, who coaches football at B. McDaniel, where Hunter plays quarterback, believes Watson is uniquely prepared for the inevitable pressures that will come with a four-year high school career conducted entirely in a fish bowl.

“I think he understands the level of work that’s going to be required in the next several years,” said Cates. “A lot of times when a kid has a whole lot of success in their early years, sometimes they don’t respond to coaching. But Hunter’s one of the most coachable kids at this age that I’ve had in a long time. To have the all-around package in 8th grade is pretty tremendous.”

While admitting that his dream is to be drafted in the first round four years from now, Watson said his immediate goal is to get the grades necessary to attend university in College Station.

“I really want to go to college, and you have to have the grades to get into college,” said Watson, who estimated his GPA is around 3.5. “So school comes before sports; it comes before everything.”

That commitment to curricular activities landed Watson on the agenda for Monday night’s Denison City Council meeting, where Mayor Jared Johnson and council members are expected to honor the 8th grader for his achievements both on and off the field. Well, that and the fact that Watson was recently selected as one of 16 members of the U.S. National Baseball Team that will compete against 15-year-olds from around the world next summer.

If B. McDaniel assistant coach Brock Johns is to be believed, recognition like the city council meeting could be just the beginning of the legend of Hunter Watson.

“He’s not just gifted with athletic ability, he’s got the big picture figured out,” said Johns. “People just need to watch; Hunter Watson is going to be the face of Denison here in the next few years.”