You are at:Home»7u-14u»MVP Banditos Win It All at 13u Perfect Game World Series 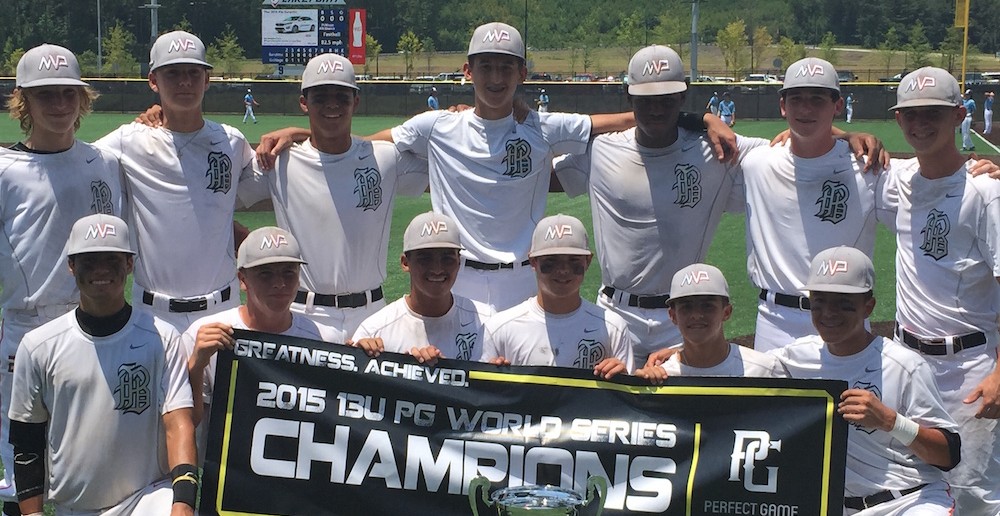 MVP Banditos Win It All at 13u Perfect Game World Series

Not to be overshadowed by the 14u PG World Series, the 13u age bracket had a World Series of their own, and the talent was arguably just as good. In both age groups, these players have shown that they are at a level of baseball that is far beyond their years. This morning, four of the best 13u teams in the country battled fo

r a chance to play in the 2015 13u Perfect Game World Series championship game. The GoWags National Lumberkings and the MVP Banditos would eventually emerge as winners from their semifinal games, with the Banditos eventually coming out on top, 11-3.

There was slightly more offense packed into these matchups than the 14u semifinal contests, especially in the MVP Banditos game against the San Diego Show. The Banditos got up early on the San Diego Show with a three-run lead, but they would not get rid of the Show that easily. The Show came back in the fourth with two runs to close the deficit to just one run, but that would not last for long. The MVP Banditos put their bats to work and truly earned their spot in the championship game over the course of the last few innings, scoring five more runs to pull away with an 8-3 victory.

The GoWags National took the field against Vision Baseball in their semifinal. GoWags’ Robert Richardson showed up big time for this game with a three hit performance and had a massive contribution towards the six runs that they scored. This game was close for most of the contest, and before the sixth inning, the score was 3-2, but in the bottom of the sixth the 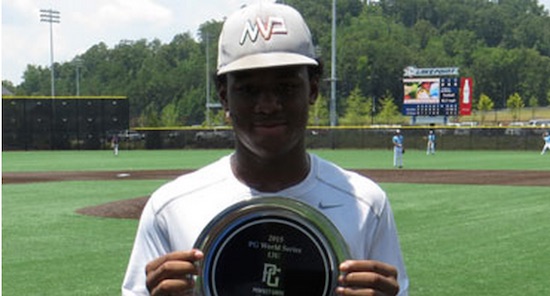 Lumberkings put up three runs to push Vision Baseball back even farther. In the top of the seventh, during Vision’s last time up at the plate, there was a chance for a comeback, but it was quickly squelched by a smooth double play and the Lumberkings would go on to win the ball game, 6-2.

Now it was time for a dramatic finish to this exciting round of playoffs in the 2015 13u Perfect Game World Series.

The Banditos came out swinging in the title game against the GoWags National Lumberkings. An error put their leadoff man on first and they were able to drive him in very quickly with some timely hitting. An RBI single byMaurice Hampton in the first inning and an RBI double by Joseph Cruz, followed by a two-run double by Zane Keener during the second inning, fueled MVP Banditos’ offense early.

That was the theme of the Banditos’ offense; to put a runner in scoring position anyway they could and then let the next man up do his job. GoWags threatened to do some damage in the bottom of the first, as they loaded the bases with no outs, but Keener, who also started the game for the Banditos, showed he was a true bulldog and got out of the jam unscathed. The pitching for the Banditos overall was great at the beginning, and the defense was just as good. The routine plays were made with ease, and there was even a breathtaking diving catch by Hampton in the third inning. The Banditos were putting in max effort this game, and it was definitely paying off.

The Banditos steadily put runs on the board, and by the fourth inning the score was 7-1. Little by little the Lumberkings chipped away at the lead of the Banditos, scoring one run in three straight innings. However, in the final inning, there was a late surge of offense by the Banditos that widened the deficit even more and the Banditos would walk away with the championship title. 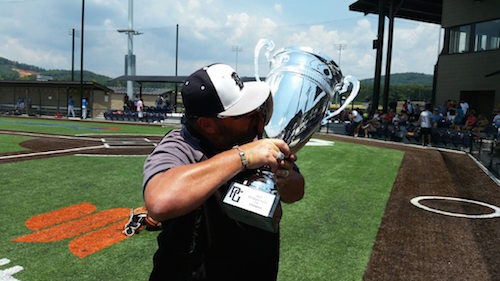 Despite the fact they lost to a very good Banditos team, this GoWags National team has much to be proud of. In a tournament with 20 of the top teams in the country, they finished in second place, and many of their players really made a name for themselves on this large stage; one of them being the tournament’s Most Valuable Pitcher, Luke Wagner. Wagner threw five important innings for his squad this week, 2 1/3 of them being in the semifinal win against Vision Baseball. He posted a 0.00 ERA, allowing only five hits while striking out five.

“We played together this week. This was our first time as a team, and we have always played against each other, but we tried to come together this week,” Wagner said. “We played to our ability. Off-speed and fastball command were big for me. If I have command of my fastball, I’m pretty good. I think this tournament is a good confidence booster because we made it to the championship with 20 really good teams. We’ll learn from it, but now we know what it takes to make it to this spot.”

All weekend long, the MVP Banditos tore through the competition and displayed immense power from the plate. Through their four games in pool play, they averaged just over 10 runs per game. Leading the offensive production for them was the tournament Most Valuable Player, Maurice Hampton. Hampton was key in the field and at the plate for the Banditos’ championship run. He finished the week with a batting average of .529 with two homers, seven RBI, and five runs scored.

“I was staying with what I had been doing all summer and I didn’t let the heat get to me,” Hampton said of his success. “Also, I wouldn’t be able to do anything without my teammates. I see a lot of off-speed, so I try to think right-center and try not to pull off the ball. We have a lot of good hitters, and anyone was capable of winning this MVP award, but I just happened to get hot at the right time.”

This is the MVP Banditos first big tournament win as a program, seeing as they just recently merged with the well known Houston Banditos, run by Coach Ray Deleon. This team hails from Miami, Fla., but carries kids from both Florida and Texas. Coach Deleon and Mike Sagaro felt that merging the MVP and Banditos program together would best serve the youth by giving players in different areas more opportunities to play in top-notch tournaments like this one.

They are thrilled to get this first tournament win as ‘MVP Banditos’ under their belt and look forward to many more. After the game, Head Coach Deleon was quite a busy man, but was able to share some very kind words about this program and the special players on this 13u team.

“We never stop playing. Our quote of the week was to never stop playing, and that’s what we did. We never stopped playing,” Coach Deleon said of the win. “We got into a lot of hitters counts, and we didn’t miss the fastball. We let the off-speed stuff go, and at this age people aren’t throwing breakers for strikes, so we just spit on the curve and sit fastball. These kids did very well, but I want them to stay humble. I’ve seen kids do well at this age and then they’re not even playing when they’re juniors in high school because they are burned out, or hurt themselves.

“We have a lot of great talent for such a young age, but they need to stay grounded and keep working. This team gelled, and they are a tight-knit group. The future is bright for them.”