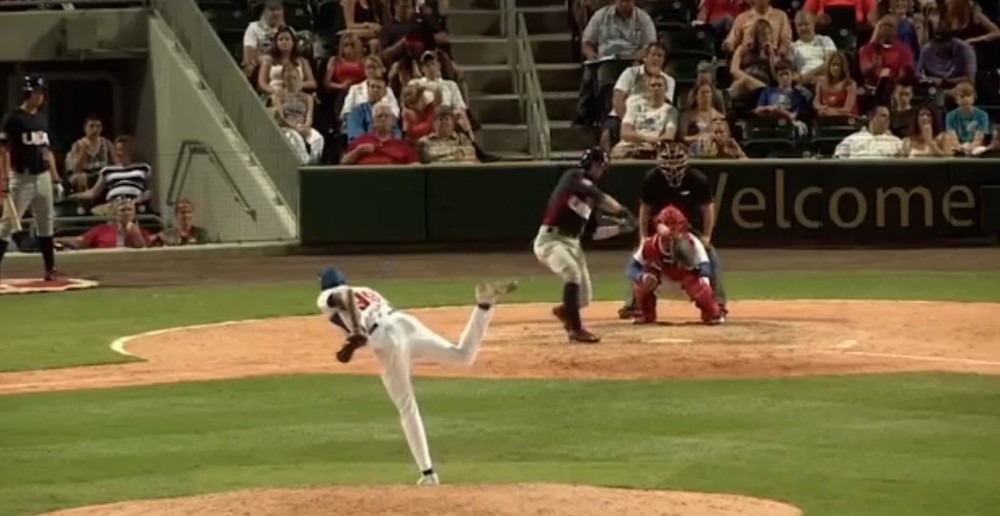 CHARLOTTE, N.C. — Ryan Howard (Missouri) and Nick Banks (Texas A&M) each launched home runs to lift Team USA to a series-clinching 11-1 win over the Cuban National Team, equaling the largest win over Cuba in national team history, on a perfect Saturday night, in front of 10,352 at BB&T BallPark.

Team USA (9-5) claimed the series-clinching victory in the fourth game of the series. The Red, White and Blue opened the series with back-to-back 2-0 wins, including firing a no-hitter in the lidlifter. Cuba picked up a 5-1 win on Friday night at the Durham Bulls Athletic Park.

The 10-run win for Team USA ties the largest win for the Collegiate National Team over Cuba in series history, dating back to 1985. In 1988, Team USA posted a 12-2 win over Cuba in Fort Mill, S.C.

Team USA jumped out to a 2-0 lead after the first inning, adding a run in the seventh on Howard’s blast, before exploding for a four-run frame in the seventh, including two-out RBI doubles from Howard and Matt Thaiss (Virginia). In the eighth inning, Team USA used four runs to go up 10-0, including Banks launching an opposite-field, two-run homer.

In its best offensive production of the series with Cuba, Team USA combined for 11 runs on 16 hits. Howard led the way by going 3-for-4 with a double, homer and walk. Team USA also got two-hit games from Thaiss, Bobby Dalbec (Arizona) and Corey Ray (Louisville). Buddy Reed (Florida) went 3-for-6 with an RBI. Catcher Chris Okey (Clemson), who caught the no-hitter in the opener, added a hit.

Banks, a native of Charlotte, went 3-for-5 with three RBI and his first homer of the tour. On the year, Banks has eight two-out hits and seven two-out RBI, leading the club with a .429 (21-for-49) average.

Brendan McKay (Louisville) took over to start the fifth inning in relief of Tyler. The Baseball America National Freshman of the Year, McKay retired five hitters, allowing a hit and a walk, striking out one.

With runners on the corners, two outs and the tying run at the plate in the bottom of the sixth inning, Team USA turned to righty Stephen Nogosek (Oregon) in relief. Nogosek got a fly out to escape the jam and worked three shutout innings, allowing just one hit, one run, one walk and striking out two. Tommy DeJuneas (N.C. State) came on to get the final out of the game.

The series will conclude on Monday at 7 p.m. in Cary, N.C., at the USA Baseball National Training Complex.

Team USA got on the board in the first inning, as Reed led off with a single to leftfield, taking second on an error. After Bryson Brigman (San Diego) laid down a sacrifice bunt to push Reed to third, Ray smacked a RBI double off the wall in rightfield, giving Team USA a 1-0 lead. Banks followed and single to rightfield, with Ray taking third and scoring on an error, and Banks advancing to second on a second error of the frame.

Howard gave Team USA a three-run lead with a one-out homer in the sixth inning, lofting a no-doubt dinger over the leftfield fence.

In the seventh inning, Dalbec led off with a full-count walk, taking second on Reed’s single to rightfield with two strikes. After a pair of outs, Banks slashed an opposite-field single to score Dalbec and stretch the Team USA lead to 4-0. Thaiss then ripped a two-out, two-RBI double into the right-centerfield gap, scoring Reed and Banks for a six-run lead. After a pitching change, Howard drilled a two-out RBI double into the left-centerfield gap, scoring Thaiss.

Team USA added to its lead in the eighth inning, as Okey led off with a single through the left side and Dalbec hung a monstrous fly ball into deep leftfield that got lost in the lights, going for an RBI triple.

Cuba got on the board in the ninth inning, getting a two-out, RBI double from Rudy Reyes.