You are at:Home»News»‘Team Effort’ Lifts Banditos to Title 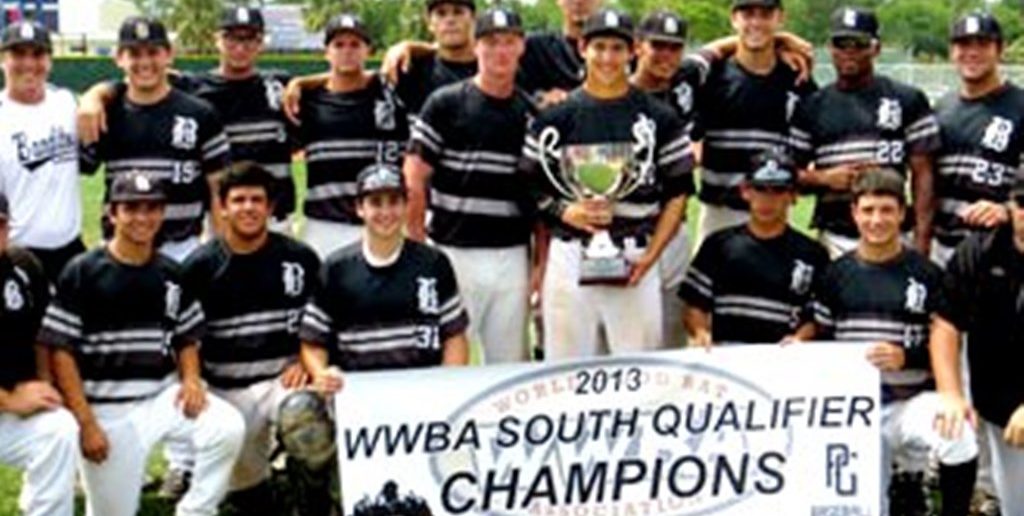 These were hard-earned accolades that no one could say weren’t well-deserved. But anyone that watched the Banditos 17u Black play over the last four days on their way to winning the PG WWBA South Qualifier championship knew the title was the culmination of an “all hands on deck” sort of mentality.

That was never more apparent than in the championship game, a contest in which the Banditos 17u Black (7-0-0) and fellow heavyweight Dallas Patriots 18u-Sherard (5-1-0) went at it like there was even more at stake than a paid invitation to the prestigious PG WWBA World Championship in Jupiter, Fla., the last week of October.

Over nine arduous innings of play, there wasn’t an ounce of give evident on either side; neither side was able to muster a gram of take. Finally, after 2½ hours of virtually zero give and take in the smoldering Texas humidity, the Banditos were able to take what they were given.

Connor Wong hit a broken bat, two-out, two-run, pop single to left field that broke a 1-1 tie, and the Banditos managed to hold on to win the title game, 3-1 in nine innings, at the main stadium at Baseball USA. It marked the third straight year the Banditos organization won the PG WWBA South Qualifier.

“Beating this great organization, the Dallas Patriots – they had us to the end and we came back in the seventh and clutched up and got a run,” Garrett said. “And then Connor Wong with the broken bat, two-RBI single, it was just a great team effort; the pitching was just outstanding for us this weekend.”

The Banditos 17u Black were playing Monday without two of their more prominent prospects – Texas A&M commit Jake Jarvis and TCU recruit Justin Twine – who had previous obligations at their respective high schools. Other Banditos stepped to the forefront in their absence.

“It was a total team effort; there was no one superstar today,” Banditos 17u Black head coach Ray DeLeon said. “Everybody did their part and everybody knew their role. We laid every bunt down, we got guys over and being down one run with two outs in the (seventh) inning and getting a key run there to tie it, and getting it into extra innings and winning it at the end was awesome.”

The championship game was scoreless until the bottom of the sixth when the Patriots finally pushed across an unearned run thanks to a Banditos error; they had a second run wiped out when the base-runner was thrown out at home. The Banditos tied it in the top of the seventh by scoring their first run of the game on a wild pitch.

With the score still tied going into the ninth, Joseph Trahan delivered a one-out single, Corbin Martin walked and they moved to third and second, respectively, on a fielder’s choice. That’s when Wong came through with his busted-bat magic.

Pulido, the starting pitcher for the Banditos, and Dallas Patriots 18u-Sherard starting right-hander Brett Hinson laid down the ground rules for the championship game with their early actions – this would be a day the pitchers wrote the script.

Pulido, listed in the program at 5-foot-11, 180-pounds, and Hinson, a 6-5, 225-pounder from Lubbock, both worked 4 2/3 innings with remarkably similar results. Pulido didn’t allow an earned run on one hit while striking out four and walking one, and Hinson gave up no runs on three hits with two Ks and four walks.

The championship game start was Pulido’s second of the tournament. He earned MV Pitcher honors by allowing no runs on just one hit over 8 2/3 innings with nine strikeouts and two walks. Sticking to the theme of the day, Pulido gave all the credit to his teammates.

“They battled the whole game and they never gave up,” he said. “I really appreciate it; they did their job. I threw a couple of innings on Saturday and then I came out here again today, and I felt all right. My arm kind of started getting tired toward the middle innings but I it was fine.”

DeLeon used 12 pitchers over the seven games – four in the championship game – and they combined to allow only six earned runs over 49 innings (0.86 ERA) on 27 hits with 54 strikeouts and 21 walks.

“Our pitchers threw strikes and they gave our defense a chance to do (its) job,” he said. “… Little Joey Pulido – I don’t care what anybody says but I’ll say it right now – that kid could pitch D-I baseball right now, and if people don’t think so, they’re stupid. He knows how to pitch and he gets outs and that’s what he did. The kid can pitch and somebody needs to give him a chance.”

Garrett, the Perfect Game All-American and a Rice commit, earned MV Player honors batting 8-for-20 (.400) with a double, triple, home run, two RBI, six runs and a team-high 1.200 OPS. He, too, deferred to his teammates, even the ones that were noticeably absent.

“We didn’t have Jake Jarvis or Justin Twine today, and that was two big bats we were missing,” Garrett said. “But just playing our ‘skeleton team’ and coming together and getting the wins that we needed together (was special).”

So was winning the South Qualifier championship for a third straight year.

“It’s good for the program to just keep winning,” DeLeon said. “We keep having fun and it’s pretty amazing what we’ve accomplished just this weekend alone.”

The Patriots’ Hinson ended up working 8 innings over four tournament appearances without giving up an earned run on four hits, while striking out nine and walking four. The Pats’ Chase Sarchet enjoyed a fine tournament at the plate batting 6-for-16 (.375) with two doubles, a triple, four RBI and four runs.

The Banditos 17u Black won their first two pool-play games by shutout and wound up outscoring their three pool opponents by a combined 18-4. The arms took over again during Sunday afternoon’s first two rounds of the playoffs with 17u Black topping Team Rawlings-Baker out of Houston, 4-0, and Texas Magic Gold from Humble, 7-0, to reach Monday’s semifinals.

In a battle of Banditos outfits, Trahan smacked a two-run home run in the bottom of the second and the Banditos 17u Black never trailed en route to a 3-2 win over the Austin Banditos (5-1) in one of the semifinals at Baseball USA. 17u Black led 3-0 after three innings and held on to move into the title game against the Patriots.

Stone Garrett was 3-for-3 with a run scored and Andruw Gazzola was 2-for-3 with an RBI for the Banditos 17u Black.

“Playing three games yesterday, I know a lot of us got home at like 10 o’clock – just playing three games and being on your feet all day in the hot, humid weather here in Texas (took its toll),” Garrett said. “And then today, beating the other Banditos from Austin, that was a great team win; they almost came back.”

“Salinas has been horse,” DeLeon said of the Rice commit. “He’s come onto the scene and now he’s one of the top prospects, and he’s just a bulldog. He’s getting better and better and better … and he’s been doing it for us all year.”

The Austin Banditos ran through their pool with three straight wins by a combined count of 18-3. They were a 5-1 winner over Velocity Lab Baseball out of Corpus Christi in the playoffs’ first round then posted a 5-2 victory over the Houston Banditos Texas in the quarterfinals.

The Dallas Pats played only two pool games and won them handily by a combined 15-1. They were tested right out the gate by the unbeaten, unscored upon Texas Sun Devils – a pre-tournament championship favorite – and responded with a 4-3 victory. Breathing a sigh of relief, the Patriots advanced to the quarterfinals where they posted a convincing 7-0 win over the Austin Banditos (UC).

The Patriots moved into a semifinal match-up against a Marucci Elite Houston squad that had not been scored upon in its previous five games at the tournament and escaped with a 5-4 victory that punched their ticket into the championship game.

Marucci’s shutout innings streak ended in a hurry when Dallas scored single runs in each of the first four innings and led, 4-2, heading into the seventh. The Elites, intent to not go down without a fight, tied the game at four when Drew Tyler delivered a bases loaded two-run single with one out in the top of the frame; the Pats got out of that jam and the game moved into the bottom half of the inning.

Sarchet and Connor McMann each delivered clutch two-out singles to keep the Pats’ hopes alive. That set the table nicely for Garrett Moon, who stepped in and drove a double to the wall in left-center that scored Sarchet with the winning run.

Marucci Elite Houston (4-1-), the unofficial host of the South Qualifier, endured a scoreless tie with Team Combat/HTB during pool-play but won its other two pool games by a combined 16-0. It remained unscored upon through the first two rounds of the playoffs with wins of 10-0 and 11-0 over Twelve out of College Station and the Fort Worth Cats, respectively.

Now the Banditos (and most likely the Dallas Patriots and Marucci Elite Houston) can look forward to trips to Jupiter and the PG WWBA World Championship in a little over three weeks. For the Banditos it’s a case of first conquering the South and now trying to overtake the World.

“It’s going to be great fun, tons of fun,” Garrett said. “Catching up with the Perfect Game All-Americans and seeing them again, see how they’re doing and see how much bigger they’ve got and making me look small. It will be pretty fun.”

DeLeon looks at it from a coach’s perspective:

“Anytime you win a tournament like this before a real big one, it’s good for morale,” he said. “It’s good for the kids, and now you don’t have to make may moves – you don’t want to mess with a winning formula because you just won (a championship).”

DeLeon then smiled while a look of genuine satisfaction crossed his face.

“I can say I had a lot of fun; it was freaking fun this weekend,” he said. “Getting out here, being a kid again, chewing seeds – it was just a lot of fun. I just appreciate Perfect Game for doing this. If they don’t come in, what are we doing this weekend?”