You are at:Home»15u-18u»U.S. falls to Cuba in the gold medal game 6-3; Bandito Thomas Burbank honored by the IBAF

U.S. falls to Cuba in the gold medal game 6-3; Bandito Thomas Burbank honored by the IBAF 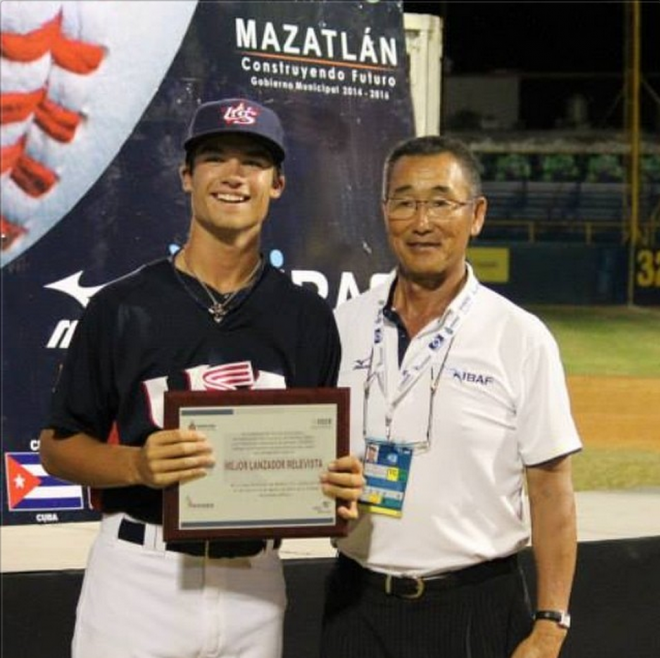 MAZATLAN, Mexico – The USA Baseball 15U National Team fell to Cuba, 6-3, in the gold medal game of the WBSC ‘AA’ 15U World Cup Sunday night in a heartbreaking conclusion to an otherwise outstanding tournament for Team USA.

The U.S. concluded the tournament with the best record (9-1) and outscored its opponents 107-29. However, Cuba (8-2) had the better team Sunday night as it trailed 3-1 entering the sixth inning, but rallied to score the game’s final five runs to claim victory. With the neutral crowd squarely in Cuba’s corner, the talented squad put the finishing touches on the comeback with a three-run eighth inning that was highlighted by an RBI single from Miguel Vargas and an RBI groundout from Adrian Morejon.

That would be all the runs starting pitcher Morejon would need as he turned in a brilliant effort to lead Cuba to gold. Morejon, who threw an inning in relief in Cuba’s 2-1 victory over Panama Saturday, went the distance against the U.S. Sunday as he hurled 124 pitches. He struck out 12 U.S. batters, and gave up three runs on seven hits and a walk.

At the plate for Team USA, Brice Turang (Corona, Calif.) finished off a remarkable tournament with two more hits and two runs scored. Turang, who was honored by the IBAF (International Baseball Federation) in a post-game ceremony, batted .553 for the tourney and played in every inning of every game for the U.S. He led the squad in hits (21), runs (19) and RBI (13), while posting a .684 slugging percentage and a .617 on-base percentage.

Also honored postgame were Alejandro Toral (Davie, Fla.) and Thomas Burbank (Beaumont, Texas). Toral batted .385 for the tournament and had a homer, six RBI and team highs in walks (9) and hit by pitch (7). Burbank, meanwhile, didn’t allow an earned run in 7.1 innings of relief while striking out 11 batters. His most impressive outing was against Chinese Taipei, where he went four innings in relief to pick up the win. His maneuvering of the international tiebreaker inning kept Chinese Taipei from scoring a run in the top half of the 10th frame and set the stage for a thrilling walk-off from Austin Martin (Orange Park, Fla.) in the bottom half.

After dozens of practices, several scrimmages and 10 games in Mazatlan, the 2014 version of the USA Baseball 15U National Team is set to go its separate ways Monday morning. However, the memories of three weeks in July and August 2014, the ups and downs and the smiles and the tears, will last a lifetime.