#1 of 384: Banditos Three-Peat as 16u Perfect Game World Champions

EMERSON, Ga. – The Banditos Scout Team took home the hardware in the 16u WWBA National Championship, defeating BPA by a score of 2-1 and returning back to the top of the amateur baseball world.

The Banditos came in as the No. 45 seed, winning five out of six pool play games, with their only blemish being a 2-1 loss against CBA Wave. They notched a shutout in all five of their playoff games leading up to the championship and were helped by stellar pitching all week, allowing only one run over their last seven games in the tournament.

“We threw strikes and our defense played well. When you’ve got your up-the-middle in Volpe. Volpe, to me, is one of the best players I’ve coached in 23 years,” Deleon said. “Volpe was our catalyst in our defense. Him and Luis Tuero up the middle were phenomenal all week long.”

The Richmond, Texas-based team won a 2-0 affair against the No. 17-seeded 5 Star National Burress, ending 5 Star’s perfect record and sending them home. Matthew Thompson took the ball for the Banditos in that one, firing six shutout innings, striking out 10 batters.

“Matthew Thompson, I can’t say enough,” said Banditos head coach Ray Deleon. “He hadn’t pitched in a month in a half and he comes up and throws 90 pitches and 10 strikeouts against one of the best teams in the country, struck out one of the biggest prospects on his breaking ball.”

“My slider was really working. My fastball got off to a rough start but it started coming at the end,” said Thompson, a Texas A&M commit. “I’ve pitched in playoff games before, but it’s really reassuring to me that Ray trusted me to throw that game for him so we can advance.”

BPA came into the game fresh off a 1-0 shutout of the East Cobb Astros 16u. Jared Jones pitched 6 2/3 innings, giving up just three hits and a walk while striking out nine Astros. The No. 3-seeded BPA team won six games in pool play to garner one of the top spots heading into the playoffs. They would win five straight games in the playoffs, notching shutouts in the quarterfinals and semifinals, taking their perfect record into the championship game.

The championship game was scoreless through the first, with each team threatening with a baserunner early. Nothing would come of those threats, as both teams were locked in a 0-0 tie through the top of the fourth, tallying only one hit apiece.

BPA would break the trend as Jared Jones and Cutter Clawson started the bottom of the fourth off with back-to-back singles. Niko Santamaria was tasked with bunting both runners over but would be walked by Jared Southard to load the bases. That would be the end of the day for Southard, who pitched three innings, giving up three hits and two walks, while striking out five.

Jake Hymel would be thrown into the bases loaded, no-out situation, and would get Cooper Benson to ground into a fielder’s choice with the infield in, failing to score the run. Dutch Landis would be next, and with a safety squeeze on, the defense was able to cut the run down at the plate. Hymel would get Blake Pivaroff swinging to end the threat with no damage done. The LSU commit would throw 2 1/3 innings for the Banditos in relief.

Pivaroff would shake off the strikeout, coming back on the mound in the top of the fifth. He walked the leadoff batter Yordani Carmona, who would move up to second after a bunt and to third on a wild pitch, but Pivaroff would strand him at third. The righty turned in a brilliant performance, going 6 2/3 innings for BPA.

A 93.7 mph double of the bat of Cutter Clawson would put the pressure on the Banditos in the bottom of the sixth. After an intentional walk to Niko Santamaria, Albert Hernandez would take the mound for the Banditos. Cooper Benson would be the first to face the righty, and would go down on a slider. With two outs, Dutch Landis would single to right field, scoring Clawson on a bang-bang play at the plate, allowing BPA to take the lead 1-0.

That lead would be short lived as the Banditos would take a late lead in the top of the seventh. With runners on second and third after a balk, Yordani Carmona would double home two runs, taking the lead 2-1.

“Well, I was going to bunt him over until our pitcher our third batter Zach Doss and coach Ray believed in me and I got a clutch hit for all of us,” Carmona said. “He threw me a changeup before that pitch, so I was just sitting on changeup and he threw it again and I just hit it.”

Derrick Cherry came in and set BPA down 1-2-3 in the bottom of the inning, sealing the championship win. Both teams had to play six games in the span of two games, and in the end it would come down to the final inning of the tournament to decide a winner.

“At the end of the day, we’re tired, we’re beat up,” Deleon said. “Playing four games last night just beat us up man, and then everybody was just one step behind today, they were, we were, anybody that played in those four games, I mean come on, you don’t play four games and then wake up the next morning and play baseball, so it took a lot out of us, but you know what, the kids, they competed.”

Tristan McDonough would be the catalyst for the lineup of the Banditos, hitting .444 (8-for-18) while compiling a .607 OBP over 11 games. The 6-foot-1, 185-pound righthanded hitter would drive in eight runs for his team and also launched three doubles out of the No. 4 spot in the lineup.

“Honestly I was letting God take over. To be honest, I try not to think when I’m up there and whatever count it is, always just trying to get a pitch to drive no matter what and just trying to put my team in a position to win,” said the Miami commit, McDonough. “It meant a lot, but I was kind of surprised I got it because we have a lot of great players and one player just can’t win the tournament.”

McDonough’s performance would lead the Banditos to their first 16u WWBA Championship. The team has built a tradition of winning, having won the 17u event once (2012) and the 15u event twice (2009 and 2016) in addition to top finishes in many other Perfect Game events. This one seemed even sweeter for Deleon, knowing it was a tough tournament for his players and seeing that they have been through a lot together.

“It feels good, because after all the issues we’ve had over the last couple years, it feels good to show the world that organizational teams can win, and 80 percent of these kids have been together since they were 10 years old and 9 years old,” Deleon said. “That’s how you win, you keep the core kids together, you pick up a few and that’s how you win.”

innings, striking out 12 hitters, while not allowing a walk nor an earned run. 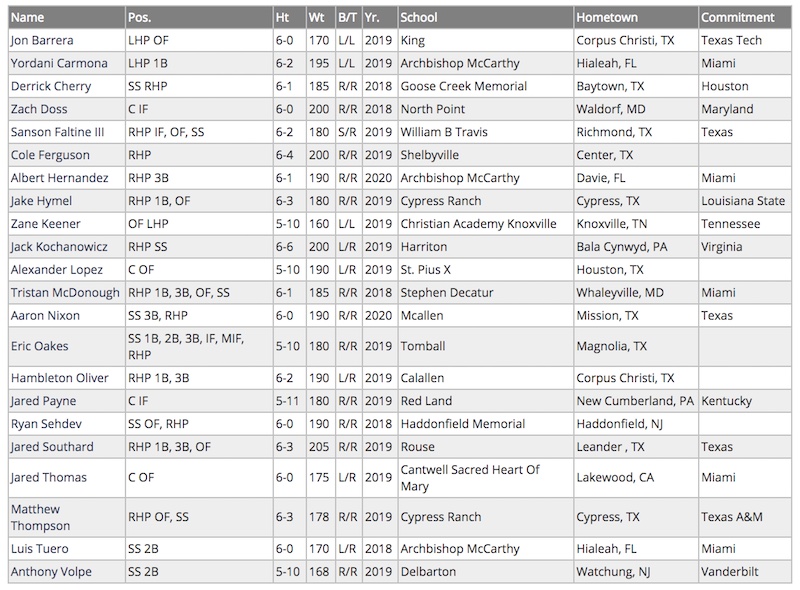