TOMBALL, Texas – A battle between two of the lower seeds of the event, No. 6 Banditos Black and No. 8 Mizuno USA, culminated with a bid to Jupiter being secured by the Banditos Black. The Banditos defeated Mizuno USA by a final score of 12-4 to capture the event title and earn a bid to the WWBA World Championships in October.

The scoring started right away in the first inning as shortstop Hilton Brown took an elevated fastball and knocked off the base of the batter’s eye in centerfield to bring home a run. A couple of batters later Chase Morris crushed a pitch deep over right field for a no-doubt three run shot and all of a sudden Mizuno was up 4-0 heading into the bottom of the frame.

After giving up four in the first, Pena settled in nicely to limit the Mizuno offense. He finished the game allowing four runs on three hits and struck out two batters while working his fastball in the 84-87 mph range.

The scoring continued in the bottom of the fourth inning as Derrick Cherry came through with a double over the head of the center fielder. After the runners were done circling the bases, the Banditos were ahead 10-4 and they continued to pile on. The Banditos added two more runs and headed to the top of the fifth with three outs to go. Lefthander Brandon Deskins closed out the game with three strikeouts and the Banditos clinched the championship.

Banditos owner and manager Ray DeLeon was very excited for his team to come away with the victory. Their undefeated performance over the course of the event was highlighted by the their pitching, which did a good job at keeping opposing offenses at bay.

“It feels good because this is our Bandito Black team, not the (Banditos) Scout Team. These kids wanted an opportunity to come out here and play and they stepped up. A lot of these kids were hungry for a Jupiter bid and they got it. They’re a scrappy team and they’re hungry. It all starts with the pitching and it was fun to see our pitchers working hard out there.”

DeLeon’s team fell behind early in both the semifinals, down 4-2 against PNT Scout Team after the first, and against Mizuno USA in the championship game. They trailed 4-0 after the top of the first only to show excellent resiliency and rattle off twelve straight unanswered runs.
“We told them not to stop playing. In baseball and especially with wood bats, there is always a chance of things happening. At this point in the junction, a lot of guys are used up, but we happened to run into a couple of good arms and we kept fighting and getting guys over. We told our guys to try to be a hard out, and they were. It’s a sign of a good team that you can fall behind and come back.”

The Banditos have been one of the premier organizations in travel ball for some time now and this won shows how much depth that they possess.

“It’s good for the program that you have this much talent. It’s hard to get to Jupiter and that you can place several teams in Jupiter. It says a lot about the program and about the kids that are fighting to get berths.

It’s not always about the top players in the program and these kids wanted an opportunity to play. There are a lot of scrappy and D1-caliber players on this team and now they’re going to Jupiter and they’re excited.” 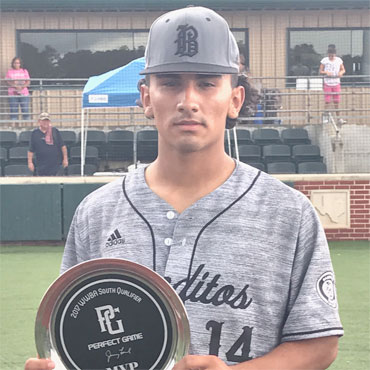 Oscar Moralez of the Banditos was named MVP of the event and showed outstanding two-way potential. He finished the tournament hitting .444 and also came into the semifinals to close out the game with another

4 2/3 shutout innings while allowing one hit and striking out ten. Dylan Smith of Mizuno USA was named the MV-Pitcher and showed a strong fastball-curveball combination. He pitched Mizuno into the semifinals and tossed 5.1 innings of one-run baseball and struck out ten batters.