You are at:Home»15u-18u»Banditos First Team Ever to Win 15u WWBA and Perfect Game World Series in Same Year 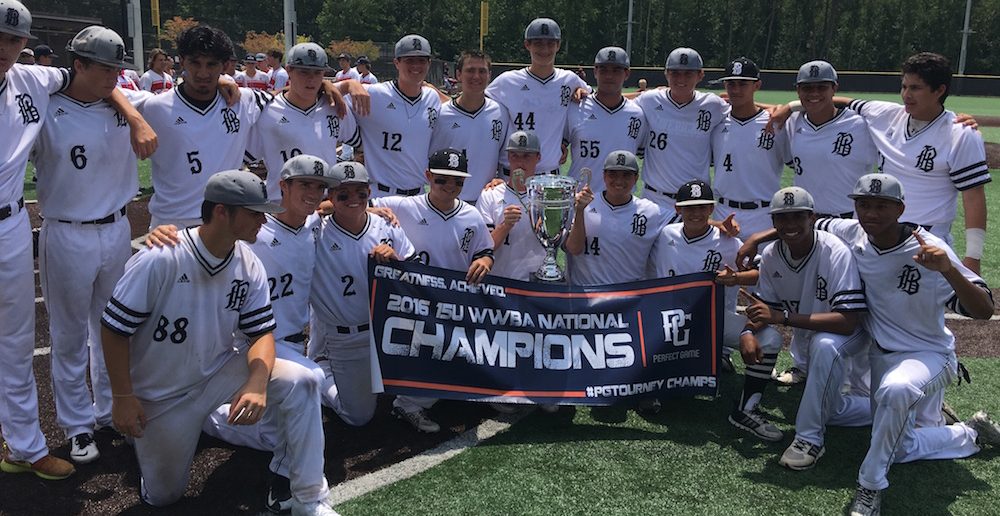 Typically when you get two of the top teams locking horns in a championship bout you’re bound to see their best prospects and that’s exactly what took place Friday morning as the Banditos Black took down the East Coast Sox-Snopek club by the score of 6-2.

The breakout star of the 15u WWBA National Championship, 2018 catcher/righthanded pitcher Christopher Willis (Ruston, La.), a recent Mississippi commit, continued to cement his name on the prospect scene with a strong week in Georgia. A frequent visitor in the daily recaps, Willis’ talent once again earns him a spot, although it was more for his arm this time than his powerful lefthanded stroke. After showing loose and easy actions with big arm strength from behind the dish in the East Coast Sox’s semifinal win, Willis provided relief on the mound in the championship game and very much looked the part of a potential high-end pitching prospect. More than ideal is his 6-foot-3, 190-pound square-shouldered frame, and just as he shows as a catcher, his delivery on the bump is rather easy and tension free. Sporting a full arm action through the back Willis opened up pumping fastballs in the 87-89 mph from a traditional three-quarters slot from which he was able to create nice angle and subtle running life to stay off of barrels. His delivery is simple in terms of mechanics, and though that is something he will need to continue to refine, there wasn’t anything that was glaring and inhibited his ability to throw strikes. The first five fastballs to leave his hand registered at 88 mph, all of which left his hand clean and easy before snapping off a handful of tight curveballs in the mid-70s with tight depth, a few of which displaying feel for a slider with more tilt as opposed to depth. The athleticism is extremely high for Willis.

Taking home MVP honors from the 15u WWBA National Championship, catcher/outfielder Jared Thomas (Lakewood, Calif.) made his presence felt throughout the tournament and was very much a key cog in the championship game. An early commitment to the University of Miami, the 2019 graduate and California prep product continually found the barrel Friday morning and recorded a pair of extra-base hits in his 4-for-4 performance in the championship game. A strongly built (5-foot-11, 165-pounds, but looks much stronger) lefthanded hitter, Thomas showed no hesitations in the box when facing velocity as he squared up an upper-80s fastball that burned the center fielder that went for a three-base hit and further expanded the Banditos’ lead. There is plenty of balance Thomas’ load in the box and he did a nice job of consistently getting extended with his swing, barreling up balls and showing the abilty to drive the opposite field gap just as he did on an outer half fastball, shooting it into the left-center field gap for a stand up double. Currently ranked No. 63 in the class of 2019 rankings, Thomas is one to keep an eye on moving forward, especially given his verstatility and athleticism that allows him to play multiple positions on the diamond.

Uncommitted 2019 lefthander Bryson Lucas (College Station, Texas) was detailed in an earlier recap from the second day of the tournament and he was handed the ball for the Banditos in the champsionship. As he did in the first outing, Lucas showed impressive velocity for an arm who just finished his freshman year of high school, but what was even more noteworthy was the fact that he got stronger with each passing inning. Beginning the game working routinely in the low-80s and touching 84 mph, Lucas continued to climb as he touched 85 mph in the fourth and then finished the inning with an 86 mph bolt located to his arm side. While there is some effort at release, the steady progression proves it doesn’t inhibit anything in terms of carrying the velocity, and it also didn’t effect his ability to throw strikes. His arm action is both short and quick through the back working to a high three-quarters slot and when he was on top of the ball he proved capable of cutting the ball nicely to his glove side. Lucas also spun a tight breaking ball in the 69-72 mph range, showing 1-to-7 shape with late bite down in the zone.

Speaking of young, interesting prospects, infielder/righthanded pitcher Aaron Nixon (Mission, Texas) has yet to play a high school game (class of 2020) but he’s already a well-circulated name in the baseball world. Listed at 5-foot-9, 160-pounds, though he appears to have outgrown those measurements, the uncommitted Nixon is gifted with a strong arm that suits him well on the left side of the infield and also on the mound. Coming into a preasure packed situation out of the bullpen in a championship game with a runner on, Nixon was able to escape the jam. Along with the arm strength that produced fastballs that steadily clocked in at 85-87 mph, Nixon showed off nice balance and tempo to his delivery with advanced feel and poise given the situation. He was able to stay off barrels with his fastball courtesy of the short running life to his arm side, and he also mixed in a swing-and-miss type curveball. A low- to mid-70s pitch with impressive, tight rotation, Nixon showed an advanced feel for the pitch and was able to locate it more than once to an opposing lefthanded hitter’s back foot for a strike with late bite down in the zone.

There’s plenty of present bat speed, looseness to the hands, and sound overall athleticism up the middle for Houston commit and 2018 shortstop Derrick Cherry (Baytown, Texas), though the Cougars coaching staff will have their hands full as Cherry is also a power arm on the mound. Coming in to close things out and ultimately secure the victory, Cherry, who’s been up to 92 mph this tournament, worked comfortably within the 87-90 mph range all the while showing his fast arm which worked to a lower three-quarters release point. The ball comes out of the hand cleanly and with the type of slot Cherry throws from there’s going to be a good bit of natural running life to the ball. He pitched almost exclusively off of his heater and once he got into a groove with nice tempo to his delivery he was able to pound the strike zone.

Chance Lovertich (Brandon, Miss.) is another talented bat on the East Coast Sox roster who peformed well throughout championship day, picking up multiple base hits which included a couple of singles in the championship game, as well as a double in the semifinals victory. A rising junior, Lovertich opened up his day by turning on an inner-half fastball on the hands for a double down the line, showing off quick hands in order to barrel the pitch. In the championship he continued to show a feel for the barrel as he put an upper-80s fastball into right field for a single and also sat back nicely on a Bryson Lucas curveball which he shot back up the middle for another single.

Uncommitted 2018 Logan Letney (Spring, Texas) didn’t pitch yesterday but he did impress with the bat and again proved he’s very much capable of being a two-way talent at the next level. Though not overly physical at 5-foot-9, 170-pounds, don’t let that fool you as he packs a lot of strength into everything he does, which includes swinging the bat from the left side. His hands are plenty quick and he showed them off by turning on an inner-half fastball and ripping it down the line for a hard, barreled piece of contact.

A part of the reason for the East Coast Sox making it to the championship game, aside from their dynamic offense, was the pitching performance of rising sophomore lefthander Cole Schroeder (Foristell, Mo.) who was fantastic and twirled a no-hitter in his team’s semifinals victory. And though he wasn’t overpowering in terms of fastball velocity, worked up into the low-80s, he did show an impeccable feel for the strike zone and did a fantastic job repeating his delivery. Throwing strikes was the name of the game for Schroeder and he continuously did that, staying short nad quick with his arm action while working on top of the ball and generating consistent plane to the bottom of the zone with short running life to his arm side. Another factor that helped for the uncommitted Schroeder find so much success was his ability to command his curveball for strikes, routinely mixing the 12-to-6 shaped pitch in from the same slot while generating nice depth to the pitch.

Just like the East Coast Sox, the Banditos receive a quality start from their arm in the semifinals game as Oscar Moralez (Baytown, Texas), the No. 73 ranked player in the nation, toed the rubber. Detailed in recaps prior, Moralez came out showing the big fastball we’ve become used to seeing as he sat in the 85-87 mph range early, bumping an 88, and continued to show 87 a few innings into the contest. Unlike his last start, Moralez lived within the zone better in his most recent outing while still showing the same fast and loose right arm. The young uncommitted righthander worked predominately off of his heater with which he was able to locate down in the zone though he still mixed in an upper-70s slider and a low-70s curveball that offered more depth.