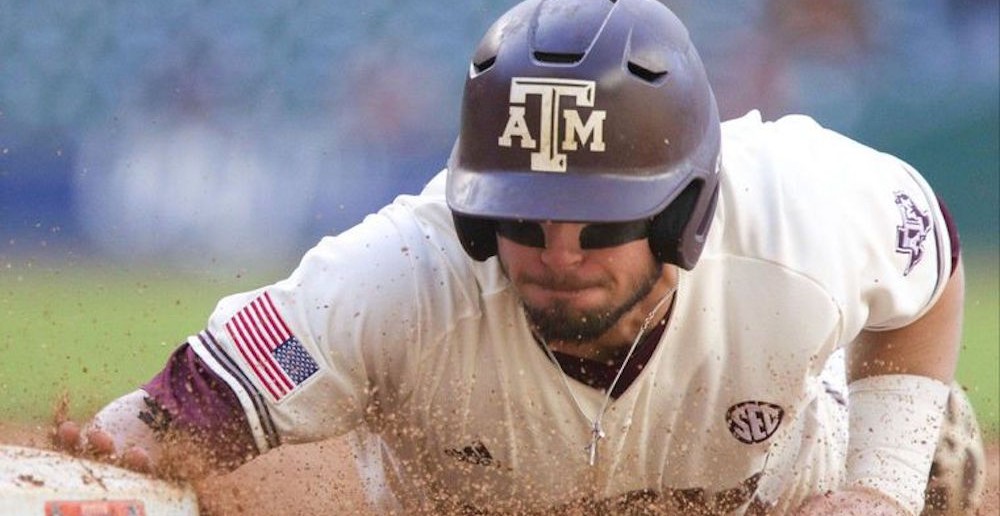 Nick Banks is without a doubt one of the best baseball players currently in intercollegiate athletics.

The former Tomball Cougar, who led the team to its first ever state championship in 2013, has continued dominant performances into arguably (and probably) the best conference in the nation.

The Southeastern Conference has a national respect for its strong baseball programs including top ranked teams such as Vanderbilt, LSU and the team Banks plays for: Texas A&M.

“That has a lot to do with the coaches and getting ourselves prepared for the season. Starting off hot like that, everything looked good,” Banks said. “We played well the rest of the season. Obviously, it was not an undefeated streak, but we played great baseball and really competed well with the top teams in the country.”

The Aggies started 24-0 before falling to Alabama. A&M finished with 50 victories and just missed out on a trip to Omaha.

“We had a good season. We put together a great team. I knew in the fall that we had a team that could do something special and we were one hit away, maybe one play, from taking a trip to Omaha. I would say that this year, in all, was a success other than not making it to Omaha.”

During the span of five postseason games, the Aggies played four extra-inning games. The final nail in their coffin came during the sixteenth inning on the road against TCU. Banks said the team did not check out, but could not get the timely play it needed.

“I wouldn’t say it caught up to us. We were in every game. I don’t think there was a point in any of the games where we were just mentally checked out,” Banks explained. “I think we knew what the end goal was and that was what we were striving for. We just happened to come up short and run out of luck in the last game.”

Banks finished the 2014 campaign with a .364 average belting eight home runs. He’s got some power, but that is not the sophomore sees himself as.

“The big key this year to me keeping up my average all year was coach Bolt and coach Seely working a lot with me in the fall. I had an approach and mindset every time I went up to bat and just knowing my role,” Banks said. “I don’t really see myself as a home run hitter, but they just kind of come when you react to pitchers and get a hold of them.”

The North Carolina native, who moved to Tomball prior to high school and played with the Banditos, produced three triples and stole nine bases. Some may start to mutter “five-tool player”. A five-tool player is someone who can hit for average, hit for power, show speed, field well and throw well. There’s a chance some scouts may see Banks as a five-tool player, but he prefers to allow others to make their own opinions.

“I’ve heard it. Some people believe it. I don’t try to put that much on me. I just like to go play baseball and have fun doing it.”

Speaking of scouts, Banks is about to enter his junior year at Texas A&M. After three seasons in the NCAA, players are allowed to be drafted. The chances of Banks being drafted are tremendous. Unlike in football and basketball, baseball players can return to the college game if they do not enjoy their draft position or are not picked. Banks described the process of entering the draft.

“You don’t really have to put your name in. It’s already in, which is the great thing about baseball. You don’t have to declare yourself for the draft in baseball.”

The draft is still 11 months away and there is still another season to go. After spending some downtime at home in July, he plans to put his focus solely on his junior year. More recently, Banks took part on Team USA for the second straight season. Not only does he enjoy wearing his nation’s name across his chest, but he’s happy some names he knows well joined him.

“It’s a great feeling, especially going back for my second year. I did it my freshman year and had a great experience. I got to be with coach (Rob) Childress and A.J. Minter, who just got drafted in the second round. This year I got to spend it with Ryan Hendrix, who is a pitcher from Cy Woods.”

Team USA played the majority of their games in Banks’ native state of North Carolina. One of his favorite memories was playing in front of his old friends and family in Charlotte.

“It was awesome. I haven’t seen a lot of my family in probably a year or over a year. The game that we actually clinched against Cuba, I hit a home run in front of 20-25 family members and 15 old friends that made it out. It was in Charlotte, where I’m originally from. It was definitely one of the more memorable moments of my baseball career.”

Although the top-notch prospect is busy causing trouble for opposing pitchers with the Aggies and Team USA, he has not forgotten the team who he won a championship ring with. Banks was able to make an extremely important Tomball baseball game, and he did so as a member of the general public standing along a foul line.

“I did go to one. I went to the regional final against Tomball Memorial. I saw game one at Tomball. I had to stand alone the foul line and watch from afar, but I was glad they came out with the win. They didn’t come out on top, but I don’t think anyone expected them to be where they were.”

The year of 2014 proved to be an extremely successful one for the city of Tomball. Alongside both Tomball teams taking their rivalry as far as it could go with the regional finals, Concordia Lutheran won a state championship. The Crusaders’ Ke’Bryan Hayes was selected in the first round of the 2015 MLB Draft. All of this on top of Banks’ amazing sophomore year at Texas A&M, which nearly catapulted the Aggies into the College World Series.

“Tomball is really good at baseball. It’s a baseball town and that’s why I moved to Tomball, because it is a baseball town. It couldn’t happen to a better community. The people here are great. It’s reflecting on everyone how great this town is.”

As with every player, Banks has his influences. His favorite player of all-time is Chipper Jones. Recently, he adapted Bryce Harper because of his ability to dominate the game and plays hard doing it. Those two players are certainly winners. Winning is one thing Banks likes to do.

“Winning is fun. I want another ring. I’ll cherish that state championship forever, but my main goal right now is to help my team win a national championship.”