You are at:Home»Alumni News»Nick Banks With 3-Hits in USA Loss to Chinese Taipei 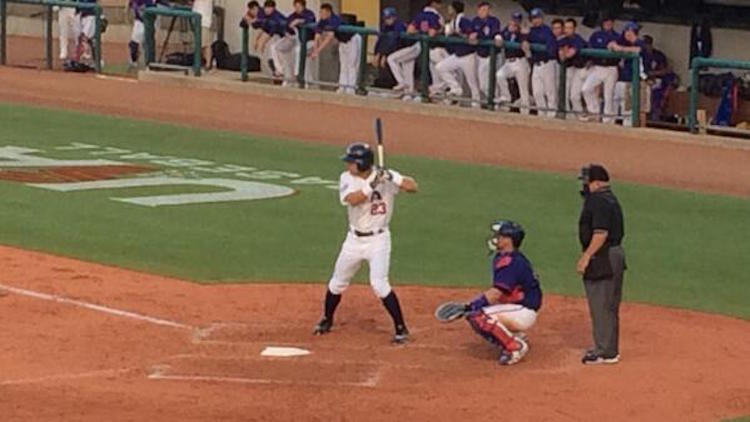 Nick Banks With 3-Hits in USA Loss to Chinese Taipei

CARY, N.C. — Nick Banks (Texas A&M) and Ryan Howard (Missouri) each collected multi-hit games but Chinese Taipei erupted for a six-run inning in the seventh inning to post a 9-2 win over the USA Collegiate National Team, on Tuesday night at the USA Baseball National Training Complex.

Banks and Howard led Team USA at the plate, with Banks ripping his second double of the summer in a 3-for-4 game. Team USA also got a double from Corey Ray (Louisville), hits from Garrett Hampson (Long Beach State), and KJ Harrison (Oregon State), and an RBI from centerfielder Anfernee Grier (Auburn).

Team USA will return to action on Wednesday, hosting the Coastal Plains League Select team at 3 p.m. at the National Training Complex.

Taiwan took a two-run lead in the bottom of the fourth inning. Po-Jung Wang led off with a walk, taking second on a sacrifice bunt. After Chih-Chieh Su drew a walk, Sung-Hsun Wu doubled down the rightfield line, scoring the duo.

Team USA immediately answered in the top of the fifth inning as Banks led off with a single through the right side, stealing second base. After a single by Howard pushed Banks to third, Anfernee Grier (Auburn) lined a sacrifice fly to rightfield to score Banks and cut into the Chinese Taipei lead, 2-1.

In the bottom of the sixth inning, Chinese Taipei plated a run to stretch its lead, taking advantage of a throwing error and a wild pitch.

Chinese Taipei then plated six runs in the seventh inning, taking advantage of a pair of errors and getting RBI doubles from Tai-Chun Yang and Yi-Hung Cheng.

Team USA plated a run in the ninth, as Harrison led off with a single, scoring on Banks’ opposite-field single to left.