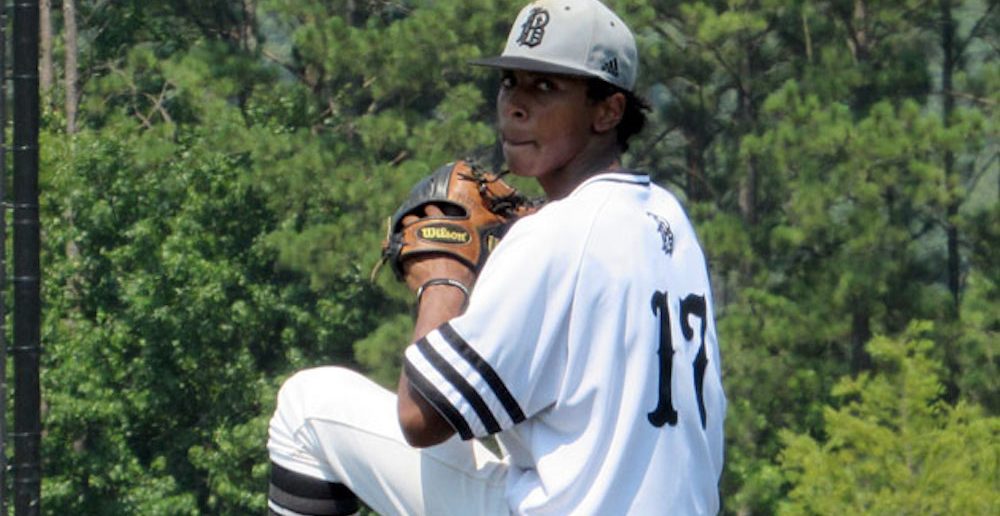 That was the headline that sat atop the lead news story on the Banditos Baseball website’s homepage when a visitor took a peak at the site last week. It refers to the fact that four Banditos 15-and-under and freshman teams won titles at four Perfect Game National Championship tournaments in 2016, with the prospects on those teams collecting the PG National Championship rings that come with the titles..

Although all four of those teams played under the Houston-based Banditos banner, the rosters were distinct and even the team names varied from tournament to tournament.

It was the flagship squad, the Banditos Black, with a roster made up of mostly of Texas prep prospects from the class of 2019, that won the 15u PG WWBA National Championship in Cartersville, Ga., in mid-July. Many of those same Texas kids joined players from seven other states, called themselves the Banditos Elite and won the 15u PG World Series, also played at the LakePoint Complex in Cartersville, the last week in July.

And then there was the Florida branch of this sprawling Banditos family tree. A team calling itself the MVP Banditos with a roster made up almost exclusively of top Florida prep prospects from the classes of 2019 and 2020, won the championship at the 15u PG BCS Finals in Fort Myers, Fla., in early July (a very similar MVP Banditos squad won the non-national championship PG WWBA Underclass East Labor Day Classic in Fort Myers in early September).  Finally, the Florida prospect-heavy Banditos Elite won the PG WWBA Freshman World Championship back at LakePoint in mid-October.

It’s also worth noting that the parent Houston Banditos upper-class team finished 2-1-1 at the PG WWBA World Championship in Jupiter, Fla., in late October with six of those 2019s – four from Texas and two from Florida – on the roster. The Texas prospect-heavy Banditos Elite won its pool and finished 2-1-1 at the PG WWBA Underclass World Championship in Fort Myers.

In winning championships at the four PG national championship tournaments – the 15u WWBA, 15u World Series, 15u BCS Finals and the WWBA Freshman World – the Banditos teams combined for a 33-2-1 record, with both losses coming at the World Series; the Black were 11-0-1 at the 15u WWBA and MVP was 10-0-0 at the 15u BCS Finals. The Banditos Elite team that won the WWBA Freshman World finished 7-0-0 and the MVP team that won the WWBA East Labor Day went 6-0-0.

When the PG tournament summer season officially closed at the end of July with the conclusion of the five World Series events, the Tomball, Texas-based Banditos Black had earned the No. 1 spot in the PG 15u Summer Travel Team Rankings with the Miami-based MVP Banditos settling in at No. 2.

“Every year, every organization is going to get a good class and it just happens to be our time with this group,” Banditos Baseball founder/general manager/manager Ray DeLeon said last week. “In (the) 2021 and 2022 (classes), it may change to somebody else, but right now we’ve been lucky enough to keep the core group together, and that’s the key to building a strong national (championship) team.

“It’s easier to go out and recruit three or four kids for a season then going out there and trying to recruit 18 or 19 new kids,” he added. “Having a core group from an early age and keeping them together is the key to success.”

The Miami-based Banditos operation is managed by Mike Sagaro, who works closely with DeLeon when it comes to constructing a roster with players that look forward to putting on the Banditos jersey.

“When it comes to Ray, he’s a very fair guy, and when it comes to putting the best of the best together, we really don’t care which state (the player) comes from,” Sagaro told PG last week. “We really look at the slots – each position – and we have kids from everywhere. … These (players), obviously, they have a passion for the game.”

DeLeon identified the pitching staff as the strength of the top-ranked Banditos Black team, led by the 6-foot-2, 175-pound Thompson: “Matthew Thompson, he’s a beast; he’s our centerpiece with that group,” DeLeon said.

The most highly ranked 2020s in the program are almost all Sagaro’s Florida prospects, with the exception being Texas shortstop Aaron Nixon (No. 18, Texas). The others, all Floridians, include right-hander Albert Hernandez (No. 20, Miami); middle-infielder Samuel Infante (No. 53, Miami); right-hander Nicholas Regaldo (No. 59, Miami) and catcher Joseph Cruz (No. 76, uncommitted).

Throughout the summer and fall, many of these Banditos’ prospects were recognized with dozens of individual honors, including 14 that were named to at least two all-tournament teams.

Cherry, ranked No. 145 in his class, was joined by 2019 Pennsylvania catcher/infielder Jared Payne (No. 97, Mississippi State), 2019 Utah shortstop/right-hander Jacob Shaver (No. 192, Arizona) and 2019 Texas right-hander/corner-infielder Hambleton Oliver (No. 365) as players named to the all-tournament team at both the 15u PG WWBA National Championship and the 15u PG World Series. But while the individual rewards are gravy, winning championships is the meat and potatoes.

“That’s why we go to Perfect Game events, because we know there’s something at stake every tournament,” DeLeon said. “We’re not going to show up just to showcase – what fun is that? College scouts want to see these kids in the grease. They want to see them in a bases-loaded situation with two outs, 3-2 count and see what that kid’s going to do.

“Those are the guys that get the scholarships, the ones that perform in the grease,” he continued, “so we’re trying to give these kids as much grease time as we can. And that 15-year-old team has a lot of that. They’ve got a lot of guys that have been in the grease for a long time, and that core group is second to none.”

Amongst the 2020s, Nixon, Hernandez and Florida right-hander Victor Mederos (No. 6, uncommitted, played mostly 14u in 2016) were selected to take part in the inaugural Perfect Game Select Baseball Festival, an elite all-star event for high school freshman that was held over the Labor Day Weekend in Fort Myers, Fla.

Hernandez, Cruz and Mederos were also on the USA Baseball 15u National Team 40-man roster and Tuero was invited to the USA Baseball 17u National Team Trials in July. On top of that, nine players that were on the MVP Banditos roster on the championship team at the 15u PG BCS Finals attended Archbishop McCarthy High School in Fort Lauderdale, Fla., which won its sixth Florida state title in seven years under head coach Rich Bielski in 2016; Bielski coached third base for the Banditos at the 15u BCS Finals.

Banditos players have long benefitted from the presence of former big-leaguers who are usually on the scene because they’ve had sons playing in the organization. Roger Clemens and Andy Pettit have helped-out with the Houston Banditos in the past, and Jason Grimsley and Mike Capel helped this past season.

The MVP Banditos’ coaching staff at the PG WWBA Underclass East Labor Day Classic included acting head coach Raul Ibanez and Orlando “El Duque” Hernandez, both of whom had sons on the roster.

“What Mike (Sagaro) and El Duque have done with these players is really exceptional,” Ibanez told PG after the team won the championship. “They’re prepared to play; the attitude. Just a bunch of great kids. We have great players and a great team but more importantly they’re really great kids that are very respectful and listen; they want to get better.”

The Banditos Elite team that won the 15u PG World Series was coached by the highly respected Texas baseball mentor and Banditos coach Sanson Faltine. DeLeon heaps praise on Faltine, saying, “He’s the one that’s kept that team together since they were they 8 years old. That core of kids has been together since an early age and he’s definitely a big reason why that team is where it’s at right now.”

The Elite lost two early pool-play games at the 15u PGWS but rallied to win the championship after an amazing single-day performance from Cherry in the semifinal and championship games. The World Series championship came just a week after the Banditos had won the title at the 15u PG WWBA National Championship, and Faltine spoke glowingly of the players’ character.

“That’s what we want our athletes to do. Believe in themselves and go out there and leave it all on the field,” he said. “I couldn’t be more proud of this group. I think the Banditos organization might have set some sort of record with the back-to-back championships in the WWBA and now the World Series. What else can we ask for?”

The challenge each of the adults involved with the Banditos organization now face is, first-off, keeping the teams together and then, keeping the young players grounded: “The race is far from over,” Sagaro said. “You’re experiencing (success) a little bit earlier than anybody else, but the minute you stop working there’s go9ing to be a few guys right behind you that will come in and want to take your slot. …It’s a race all the way to your graduation year.”

Two teams from the Banditos Baseball organization rose to the top of the PG 15u travel team universe this summer and DeLeon sees no reason why they can’t carry that success over to the 16u and 17u levels in the years to come. With the 2016 holiday season approaching fast, the 2017 summer seasons can’t here fast enough.

“I can’t wait; I can’t say enough about how mature these kids are for their age,” DeLeon said. “All of them are having big success on their varsity teams in high school and these kids would play 300 games a year if they could; these kids just love baseball. They train, they do all the proper arm care and a lot of conditioning to get ready for the long (season), and it’s definitely the best group we’ve had for many years in Banditos Baseball, for sure.”